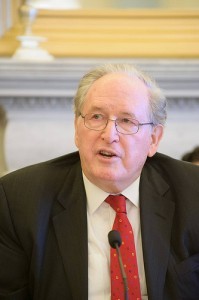 Last night, Rockefeller hosted a fundraising party for the Mountaineer PAC at his mansion in Rock Creek Park.  The Sunlight Foundation’s Party Time obtained a copy of the invite to the fundraiser, which invited individuals to attend for $1,000-a-ticket and PACs for $2,500-a-ticket. The copy listed the individuals hosting the fundraising party, and most of them are powerful lobbyists (one worked for Rockefeller’s campaign and Senate office).

Alpha Natural Resources: This company touts itself as “one of America’s leading producers of coal.”
United Mineworkers of America/Coal Miners Political Action Committee (UMWA/CWPAC): These are large mineworkers’ unions with an interest in increased mining.
Tim McKone: McKone is AT&T’s Executive Vice President-Federal Relations. He also reportedly raised half a million dollars for Sen. John McCain (R-AZ) when he was running for president in 2008.
Mike Johnson:  Johnson is a “Republican heavyweight” who works for the OB-C Group as a Principal.
Steve Elmendorf: Elmendorf is a lobbyist prominent in Democratic Party circles who works for Elmendorf-Ryan.
Lance Mangum: Mangum works in Government Affairs at FedEx Corporation.
Drew Fields: Fields is a partner at Mercury Strategies.
Jesse McCollum: McCollum is a lobbyist at Eris Group who has worked on telecom issues among others.
Peter Jacoby: Jacoby is Vice President and Director of Federal Relations at AT&T.
Brian Rice: Rice is director of regulatory affairs for Verizon and a veteran of Sen. John Kerry’s (D-MA) office. (worked for john kerry)
James Assey: Assey is the Executive Vice President of the National Cable & Telecommunications Association (NCTA). He was also a “longtime staff member on the U.S. Senate Committee on Commerce, Science and Transportation,” — which Rockefeller now chairs.
Jamie Gillespie: Gillespie works as a lobbyist for the  National Association of Broadcasters. He attended a fundraiser for Rep. Xavier Becerra (D-CA) last fall while the congressman was on the congressional supercommittee.
Patrick Robertson: Robertson is a Partner at the C2 Group. He served on Rockefeller’s senate staff for nine years, and also chaired his 2008 re-election campaign.
Sam Whitehorn: Whitehorn works for McBee Strategic Consulting.

It’s difficult to say exactly what these lobbyists are trying to get out of Rockefeller by raising money for his PAC. The senator has been a long-time champion of coal interests; in the Spring of 2010, he even lashed out at President Obama for not being supportive enough of coal. He also worked to undermine Environmental Protection Agency regulation of greenhouse gases.
The telecom lobbyists, too, have reason to be fundraising for Rockefeller. Last year, McKone issued a statement praising Rockefeller for introducing the  Public Safety Spectrum and Wireless Innovation Act, which builds a communications network for first responders. Rockefeller also lead a review of the proposed AT&T/T-Mobile merger, which ultimately was rejected by the federal government.