Whitehouse At Senate Judiciary Hearing: If We Can Ask Soldiers To Go To Afghanistan, We Can Ask The Koch Brothers To ‘Put Up With Some Impolite Blogging’

posted at 9:22 am by Suzanne Merkelson 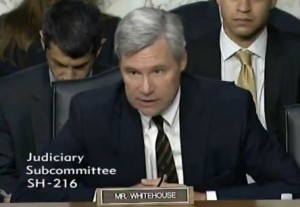 On Tuesday, a Senate Judiciary subcommittee held a hearing called “Taking Back Our Democracy,” examining special interests’ increasing grip on American politics and policy, especially focusing on the Supreme Court’s 2010 Citizens United decision. Two panels of witnesses, including both current lawmakers and activists, testified to a friendly panel of Democratic senators (no Republicans appeared to have shown up) that our democracy is under siege.

That sentiment was no surprise to anyone in the room (over 400 people showed up for the hearing, packing the room and causing spillover to another room). Again and again, testimonies confirmed that while money has played an enormous role in politics for decades, the past few years have marked a dramatic change:

Meanwhile, just one witness was invited by the Republicans on the Senate subcommittee, Ilya Shapiro from the Cato Institute, a libertarian think tank. Shapiro called Citizens United “one of the most misunderstood high-profile cases ever” and proffered the typical libertarian solution to the problem of big money in politics: more money, less limits, more disclosure. Shapiro, who essentially served as a punching bag for the liberal crowd, was lambasted by the senators on the subcommittee. Sen. Dick Durbin (D-Ill.) asked him if the Cato Institute’s connection to the Koch brothers made his testimony problematic.

And perhaps the most memorable part of the hearing was Sen. Sheldon Whitehouse’s (D-R.I.) exchange with Shapiro. Whitehouse, who championed the recently defeated DISCLOSE Act through the Senate, shared an anecdote about a recent exchange he had with a U.S. service member returning from Afghanistan without both of his legs, lost to an improvised explosive device. He compared that young man’s sacrifice to the Koch brothers, who Republicans have evoked in protesting against further disclosure, claiming that billionaire donors will face harassment with more disclosure.

“If we can ask [our soldiers] to [go to Afghanistan], we can ask the Koch brothers to put up with some impolite blogging,” Whitehouse said, provoking a rare bit of applause in a Senate subcommittee hearing.

Watch the video below: