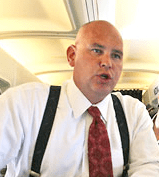 While President Obama and his campaign allies have now embraced big money politics as their savior in the 2012 election, a surprising voice argues that the people-powered Occupy Wall Street has the most potential to disrupt the race. At a talk last month in Washington DC, veteran Republican campaign operative Steve Schmidt, who managed John McCain’s campaign in 2008 and now works at the public relations firm Edelman, said that the Occupy Wall Street movement could be a consequential factor in the election this year:

The Occupy movement has already resulted in a renewed interest in ethics reform, a media dialogue about income inequality, and enjoys wide support among most demographic groups. Nonetheless, politicians from both sides of the aisle seem determined to eschew movement politics, whether from true grassroots Tea Party members to Occupy, and embrace high price consultants and million dollar campaign contributions