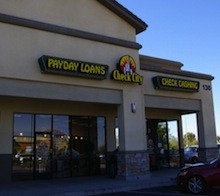 Ben Nelson, an intern with the crowd-sourced political transparency website LittleSis, has an interesting look at two donors to Restore Our Future, the pro-Romney super PAC. Nelson notes that the donors used third party corporate entities and foundations to donate hundreds of thousands to the group. Roderick Aycox, one of the donors, is head of LoanMax, a car title company that charges triple digit interest rates and has a history of abusive business practices.

Another donor, J. Todd Rawle, is part of a family payday lending business called Check City that has aggressively lobbied against consumer protections and even touted its access to powerful politicians:

Roderick Aycox is an Alpharetta, GA businessman who has so far contributed a combined $200,000 to “Restore Our Future” through his Rod and Leslie Aycox Foundation and Select Management Resources, LLC. He is also the president of LoanMax, which operates hundreds of car title loan operations, under a variety of names, in over 20 states. In 2005, the Atlanta Journal-Constitution reported that Aycox frequently appeared before various state legislatures and met with banking regulators, “encouraging them to interpret their rules to allow his business to operate profitably – that is, by charging triple-digit interest rates.” […]

Like Rod Aycox, the Rawles have long known that targeted political contributions were needed to protect their predatory business model from government oversight. In 2006 the Deseret News featured Richard Rawle and his family in a story on Utah’s largest donors, documenting over $150,000 in political giving and noting that “[t]hey have annually successfully fought bills seeking more regulation of the payday loan industry.” When John Swallow, the candidate they backed for a Congressional seat in 2002 and 2004, was defeated for a second time, the Rawles retained him as a lobbyist and legal counsel until in 2009 he was named a deputy attorney general, a position which the Salt Lake Tribune noted would require him to “provide legal advice to the Utah Division of Finance, which oversees payday lending.” (Ever the opportunist, Richard Rawle became a generous supporter of Swallow’s Democratic opponent, Rep. Jim Matheson, immediately after the second defeat; in 2010 he bragged to the Tribune of his access to the Congressman, while disingenuously suggesting Matheson had no role in overseeing the payday loan industry despite his seat on the House Energy and Commerce Committee.)

Full disclosure: LittleSis is a recipient of a grant from United Republic, the good government group that sponsors Republic Report.