posted at 3:53 pm by Suzanne Merkelson 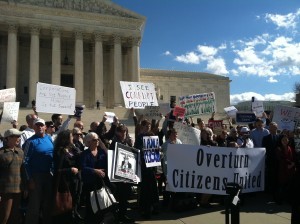 Citizens United, the U.S. Supreme Court decision that helped bring even more corporate money into politics, has already made history. Outside groups have spent record amounts influencing the 2012 election already propelling unlikely candidates like Newt Gingrich to remain in the race for far longer than actual voters seemed to want them around. People on the right and left have called for the Supreme Court to overturn this decision, and the Court has an opportunity to do so. It’s currently deciding whether to hear a Montana Supreme Court case which ruled that Montana could use a century-old state law on its books to keep corporate money out of politics.

Even while it is possible (if unlikely, thanks to the 5-4 majority maintained by conservative justices) to overturn Citizens United, the Court’s impending decision won’t affect the 2012 race. Justice John Robert’s court schedule makes clear that, even if they formally accepted the case, the Justices wouldn’t even look at it until their next term, starting October 1. The final ruling would come after the election, notes Lyle Denniston of the SCOTUS blog provided by Bloomberg Law.

ThinkProgress has pointed out that this is most likely to help Republican nominee Mitt Romney, who has $1 billion from outside groups behind him (far dwarfing Barack Obama’s own super PAC fundraising efforts). This fact doubles the sting for liberals, who are victims of not only less cash, but less power within the Court. The New Yorker’s Jeffrey Toobin recently reported on how conservative Chief Justice John Roberts essentially orchestrated the case so that it would be vastly more far-reaching than originally intended. Citizens United, he writes, “reflects the aggressive conservative judicial activism of the Roberts Court:”

It was once liberals who were associated with using the courts to overturn the work of the democratically elected branches of government, but the current Court has matched contempt for Congress with a disdain for many of the Court’s own precedents. When the Court announced its final ruling on Citizens United, on January 21, 2010, the vote was five to four and the majority opinion was written by Anthony Kennedy. Above all, though, the result represented a triumph for Chief Justice Roberts. Even without writing the opinion, Roberts, more than anyone, shaped what the Court did. As American politics assumes its new form in the post-Citizens United era, the credit or the blame goes mostly to him.

Retired Justice John Paul Stevens has frequently criticized the decision since he wrote the original 90-page dissent. In a speech at the University of Arkansas this week, he backed Obama’s 2010 State of the Union suggestion that Citizens United could allow “foreign entities” to bankroll American elections (to which Justice Samuel Alito infamously mouthed “not true” on camera). The Huffington Post reports:

“I think it is likely that when the court begins to spell out which categories of non-voters should receive the same protections as the not-for-profit Citizens United advocacy group, it will not only exclude terrorist organizations and foreign agents, but also all corporations owned or controlled by non-citizens, and possibly even those in which non-citizens have a substantial interest,” Stevens said, referencing a case in which he joined the Citizens United majority to hold that speech made or funded by terrorist groups have no First Amendment protection. “Where that line will actually be drawn will depend on an exercise of judgment by the majority of members of the court, rather than on any proposition of law identified in the Citizens United majority opinion.”

Even if the Court doesn’t do the right thing and overturn Citizens United this year, we can hope that the “foreign entities” loophole will prove to be the case’s Kryptonite. But despite all that, the Court’s timing on the decision is more than unfortunate — it’s destructive for American democracy.