posted at 8:00 am by Lee Fang
On Thursday, the U.S. Department of Justice asked officials in Florida to suspend the controversial voter purge conducted by Gov. Rick Scott’s (R) administration, citing possible violations of voting rights law. Florida officials had been purging a list of suspected non-citizen voters, estimated at one point to include at least 180,000 people, despite evidence that the list is riddled with errors. Hundreds of targeted voters are in fact American citizens. As ThinkProgress and the Miami Herald have reported, a great deal of the individuals also happen to be Hispanics and Democratic-leaning voters, suggesting the effort is deeply partisan.

The plan for the purge, according to a story from the Associated Press, was initiated last year by then-Secretary of State Kurt Browning after a meeting with the governor. Browning said he was motivated by a “Spidey sense tingling” to undergo a massive project to develop the list now being used to send letters to registered Florida voters informing them that they have been flagged as non-citizens. Although both Gov. Scott and Browning have downplayed accusations that the purge is political, a donation from a secret money group may fuel growing suspicions that the effort is partisan.

Just before Browning was selected in 2011 by Scott as Secretary of State, Browning led a group called “Protect Your Vote Inc,” which was set up to oppose fair redistricting. One of the biggest checks to Browning’s organization came from the Center to Protect Patients’ Rights, which gave $100,000 in 2010. At the time of the donation, the source of the money was shrouded in secrecy. View a screen shot of the disclosure: 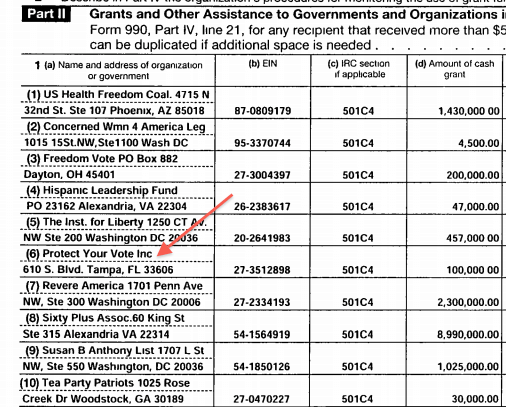 But as Republic Report exclusively reported last month, the Center to Protect Patients’ Rights is part of a universe of front groups financed by David and Charles Koch, the petrochemical billionaires, as well as several other billionaires, as part of an election-influencing effort. New reports this week about the brothers’ strategy indicate that they will now use this constellation of front groups to finance $400 million of a $1 billion campaign in outside money to defeat President Obama and congressional Democrats. The U.S. Chamber of Commerce, Mitt Romney’s Super PAC, and several nonprofits controlled by Karl Rove, will furnish the other $600 million.

Browning, who resigned as Secretary of State late last year, also relied heavily on funds from the Republican Party of Florida and the Florida Chamber of Commerce, a big business lobbying group, to support his Protect Your Vote organization, which ultimately failed in blocking redistricting reform. Browning is currently pursuing a bid for local office.

Update: The Florida Independent and the Brennan Center note that Browning orchestrated a controversial voter purge only weeks before the general election in 2008.