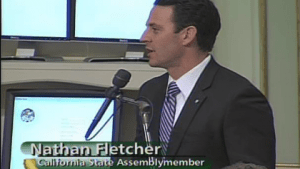 Transparency is a conservative value — at least it used to be. In the past, conservative Republicans voted time and again for greater public oversight in the public process. But in recent years, because of pressure from corporate lobbyists, reformers in the GOP have transformed into supporters of dark money slush funds.

For instance, when I talked to Senator John McCain in 2010 about the ramifications of Citizens United, he bucked efforts to disclose campaign spending and walked promptly into a campaign fundraiser organized by the U.S. Chamber of Commerce (at the time, he desperately needed help staving off a primary challenge). Watch the video here.

With campaign finance reform stalled at the Federal level, states are taking the lead. In California, legislators recently unveiled a bill to force sponsors of political ads to appear along with the spot. The proposed law would undercut the new wave of 100% undisclosed “stealth PACs,” campaign vehicles that use nonprofit designations to shield donors.

And at the unveiling of the bill, Assemblyman Nathan Fletch (R-San Diego) announced that he is an original cosponsor. “People have the right to know who is funding political campaigns and where the true support or opposition comes from,” said Fletcher. “It is time to move California to the forefront in campaign disclosure.”

The bill failed last session. But supporters, including campaign finance champion Assemblymember Julia Brownley (D-Santa Monica), are hoping that this time the legislation can pass.