Guest Post: Reform In The Age Of Corporate Lawyers 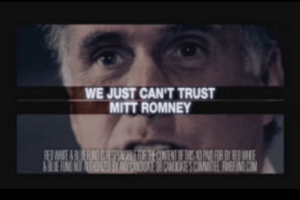 In the post-Citizens United era, wealthy individuals and corporations think democracy is a trophy they can buy, stuff and mount on their parlor walls.

But Americans scored a solid victory against big money in April when the Federal Communications Commission decided to require television broadcasters to post data online about political ad spending.

The FCC’s ruling was encouraging for anyone hoping to shed light on the shadowy groups and campaign operatives that are funneling billions of dollars to local TV stations this year. The decision will help everyone get a clearer picture of the misinformation machine behind the flood of attack ads.

But as with any hard-won reform in the age of big-money politics, this positive change can be undone by a generous application of corporate lawyers, lobbyists and campaign contributions.

The National Association of Broadcasters knows that, which is why it recently filed a lawsuit to reverse the FCC’s historic decision and spent more than $9 million in campaign contributions in exchange for support from members of Congress on both sides of the aisle, and paid lobbyists nearly $14 million in 2011, more than in any year in the NAB’s history.

That’s why the NAB’s benefactors in the House just snuck a line into the appropriations budget stripping the FCC of its ability to act upon this landmark ruling. (See section 631)

Now, a no-brainer like making broadcasters more transparent — by better disclosing the moneyed interests behind toxic political ads — is at risk of being erased from the books.

With their bottomless reserve of lawyers and money, the NAB is betting it can overturn a victory that tens of thousands of people fought hard for, a rule change that met with near-universal support in the non-broadcast media and among public interest advocates.

For decades, broadcasters have kept the public in the dark about their massive election-year windfalls.

Those that own news outlets prefer silence on this issue. (See Disney, which owns eight ABC stations reaching 24 percent of the U.S. population, CBS Corp., which owns and operates 28 stations, Comcast, which provides news programming to more than 200 NBC affiliates, and News Corp., which owns and operates 27 local affiliates) Covering this story exposes their conflict of interest, in which profit-taking trumps the news media’s duty to educate viewers about the forces behind modern-day elections.

In the two years since Citizens United took effect, Super PACs and independent third-party groups have spent hundreds of millions to inundate the airwaves with political ads. That amount is projected to double before viewers become voters in November.

The FCC’s response was an obvious solution: Require stations, which already archive this information for public view in paper files, to post ad spending data on the Internet, where anyone can see it. As viewers are being hammered by deceptive political ads we need a full accounting of the billionaires and corporate slush funds that stand behind this misinformation.

The FCC decision was a milestone in the fight for better democracy.

It defied every ounce of conventional wisdom in Washington by proving that activists, bloggers, consumer advocates and everyday people could join forces to defeat the agenda of the most powerful.

Don’t let their lawyers and lobbyists undo that.

— Timothy Karr is the Senior Director of Strategy for Free Press, the nation’s largest media reform group. In February, he published Citizens Inundated, a report on the collusion of corporate media, politicians and regulators that has corrupted U.S. democracy.