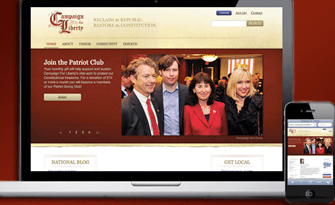 Last night, Campaign for Liberty, an organization set up to promote Ron Paul and his political goals, sent out an e-mail to its list urging members to contact the Senate and urge the defeat of the DISCLOSE Act. The bill would force secret money groups to reveal donor information in the same way PACs or Super PACs must report their funds to the public. The legislation would curb crony capitalism by allowing the American people to know which wealthy individuals, unions, or corporations are trying to buy favor with powerful politicians.

But the Campaign for Liberty, ostensibly a nonprofit set up to increase freedom, believes that Americans should be left in the dark as special interests buy-out our lawmakers and demand back room deals.

The e-mail nonsensically claims that the DISCLOSE Act would somehow persecute Ron Paul supporters, and hurt the Campaign for Liberty’s efforts against the TSA and for auditing the Federal Reserve. The claims made in the e-mail, are unsubstantiated.

Just imagine the banksters’ bureaucrat pals having the chance to get more information on which donors are helping us take the fight to the Fed.

Or a government already committed to invading every single area of our privacy attempting to learn more about the members who are helping us end the TSA and repeal the so-called “Patriot” Act, if such efforts are deemed to be in non-compliance.

In reality, the big banks anonymously donate to front groups like the U.S. Chamber of Commerce which in turn spend tens of millions to elect politicians who support bailouts and other taxpayer giveaways. The Chamber faces no disclosure requirements, allowing it to lobby and run ads without ever revealing its financiers. (In 2008, the Chamber, which reportedly received large funds from AIG, threatened lawmakers who were reluctant to vote for the bailouts.) The DISCLOSE Act would not prevent any group from spending or engaging politically. Rather, sunlight would simply provide more information in the marketplace of political ideas.

Campaign for Liberty’s conspiracy theories don’t hold water. The government — via the IRS — already has donor information for secretly funded 501(c) nonprofit political groups. The DISCLOSE Act merely provides that same information to the public when these types of groups decide to air political advertisements. If the bill were to pass into law, then we’d know which crony capitalist companies are hiding behind fronts to elect their favorite politicians.

View a screens shot of the beginning of the e-mail below: 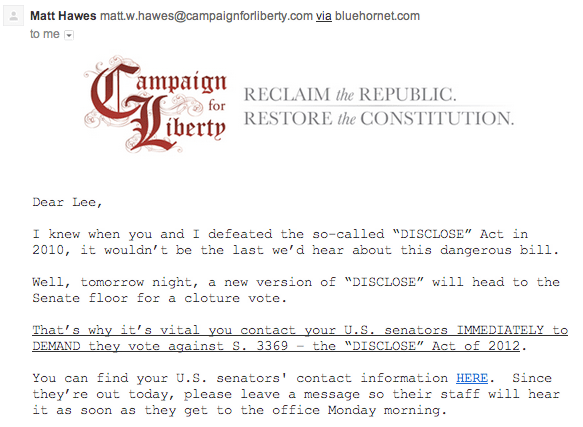