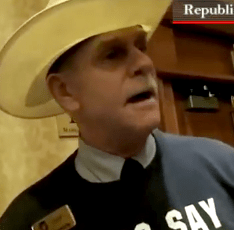 Yesterday at CPAC, the conservative convention held this week in Washington D.C., Republic Report ran into retired police officer and anti-drug war activist Howard Wooldridge. We were interested in his take on the role of money in politics in the government’s crusade against marijuana. He explained that cynical lobbyists, who place their clients interests over America, have perpetuated the cycle of over-criminalization. In particular, pharmaceutical companies and the alcohol lobby have fought behind closed doors to keep marijuana illegal. Both industries, he said, fear competition. Also police officiers and prison guard unions, seeking “free federal money” from the government, have similarly supported draconian drug war policies:

WOOLDRIDGE: The beer wholesale industry donated five figure money to defeat Prop 19 because marijuana and alcohol compete right today as a product to take the edge off the day at six o’clock. Just because marijuana is illegal, doesn’t negate the fact that there’s still competition. The beer companies don’t want it, same thing with big PhRMA. My biggest opponent on Capitol Hill is law enforcement. ‘We love the money you give us to chase Willie Nelson, Snoop Dogg, and all the rest’ — with helicopters, and especially free federal money. The second biggest opponent on Capitol Hill is big PhRMA because everyone knows God didn’t make no junk. Marijuana’s an excellent medicine for many things, taking the place of everything from Advil to Vicodin and other expensive pills […] Private prisons fight me because they want more people in jail. Is it good policy? These lobbyists don’t care.