Here’s a great catch from the Environmental Law & Policy Center in Chicago. A coal group posted a Craigslist ad offering people $50 to wear pro-coal t-shirts at an upcoming EPA meeting in Illinois. The posting has been deleted, but here’s a screenshot:

A local Sierra Club blog took pictures of people wearing the shirt at the meeting: 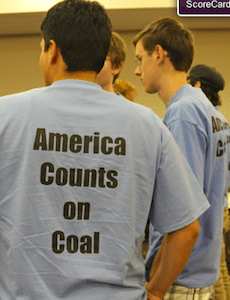 Too often, influence peddling is only quantified by registered lobbying or sophisticated ad campaigns. But these astroturf — fake grassroots — efforts are part of how powerful interests control the policy process. In this Illinois case, the coal interests were simply caught red-handed.