As we’ve shown here at Republic Report time and time again, the U.S. political system’s rules for disclosure, well, suck. It’s very difficult to know who is actually lobbying the government — a lot of people do it without ever registering as lobbyists — or exactly how and when money changes hands.

That’s a huge problem in North Carolina right now. Former Charlotte mayor Pat McCrory is the GOP’s nominee for governor and will be facing Democrat Walter Dalton in the race for the governor’s mansion this year.

Thanks to the lack of disclosure, it’s literally anybody’s guess exactly what he has been doing because he has refused to release his income tax returns, which would show how much he’s being paid by various firms and organizations.

But what we do know is this. McCrory isn’t a lawyer, and yet he’s been working for a law and lobbying firm that has worked for Big Oil and the insurance industry. He worked for the Koch Brothers front group Americans for Prosperity, pushing to stop the Affordable Care Act.

I did a quick search for McCrory’s name in North Carolina’s lobbyist registry. It didn’t pop up. But to reiterate one of Republic Report’s messages: Disclosure in America is a joke. He could’ve gotten away with plenty of influence peddling without ever registering. I looked through North Carolina’s registration guidelines, and McCrory could’ve avoided registering as a lobbyist by spending less than 5 percent of his time within a 30-day period actually meeting with lawmakers. He could also avoid registering if he acts as an “individual performing professional services in advising and rendering opinions to clients, or to executive branch officers on behalf of clients, as to construction and effect of proposed or pending legislative/executive action where the professional services are not otherwise connected with legislative or executive action.”

This week, a local reporter confronted McCrory about all this paid work he is doing that he is refusing to disclose by releasing his tax returns. McCrory admitted that he is giving “policy advice” to clients. “This attack towards the private sector has got to end! We’re not going to have anyone from the private sector who wants to run for office anymore!” he incredulously claimed to the reporter, perhaps equating lobbying — which is designed primarily to extract policy from the government — to private sector experience like running an independent business. Watch the exchange between the reporter and the candidate in the video above.

So at the end of the day, voters don’t know who is paying McCrory and for what. And there’s just about nothing they can do about it. Progress North Carolina Action is trying, anyway. They have an activist going around in an owl suit following McCrory, asking a simple question: “Hoo pays Pat McCrory?” 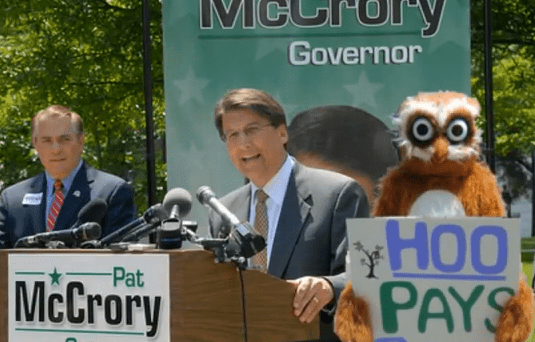