Outback Steakhouse Is Pushing Florida To Lower Its Minimum Wage For Servers To $2.13 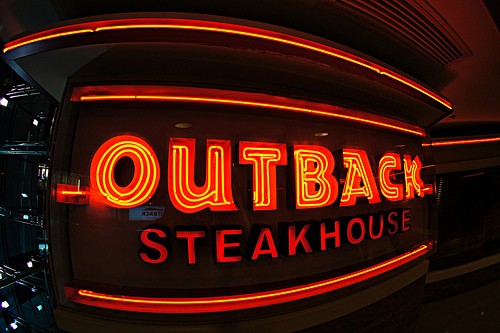 The Huffington Post’s Dave Jamieson reports on the case of a powerful lobby pushing to actually lower the minimum wage for a group of workers in Florida. The state senate’s tourism and commerce committee has written a bill, SPB 7210, that would allow restaurants to pay servers as low as $2.13 rather than the current required rate of $4.65 — a reduction of $2.52.

Jamieson explains that, in addition to the state’s main restaurant lobby,  the Florida Restaurant and Lodging Association, OSI Restaurant Partners, which owns Outback Steakhouse, Carrabba’s Italian Grill, and other restaurant chains, is a huge backer of the bill:

One of the backers of the bill is Tampa-based OSI Restaurant Partners, owner of Outback Steakhouse, Carrabba’s Italian Grill and Bonefish Grill chains. OSI Partners gave more than $120,000 to 32 Florida Republicans — and $500 to one Democrat — during the 2010 election cycle, according to the National Institute on Money in State Politics.

It is very rare for a state to lower its minimum wage for any workers. Last month, a group of lawmakers in Washington state tried to lower wages there, but the bills to do so died in committee. If the Florida bill gets any traction, it’ll likely be at least in part due to the lobbying dollars flowing from OSI Restaurant Partners.