The Obama campaign just released a campaign commercial talking about how Mitt Romney, while working at Bain Capital, oversaw the outsourcing of Americans jobs to China and Mexico. The ad calls Romney a “corporate raider” for his role at Bain (watch it to the left).

The media has picked up the Obama campaign’s attack on Romney, amplifying its message. The overall narrative being created by the Obama campaign is clear: Romney has through his business practices support outsourcing in the past, and is likely to in the future — unlike President Obama.

Unfortunately, the story is not that simple. “We should not oppose offshoring or outsourcing,” said one high-ranking presidential economic adviser at a conference of companies interesting in outsourcing last summer. The adviser then went on to compare opponents of outsourcing to “luddites who took axes to machinery early in England’s industrial revolution.”

Those quotes do not come from a Romney adviser. They come from Larry Summers, who was President Obama’s director of the White House National Economic Council. And Summers — who gave the speech after he left the White House — is not a lone voice among Obama officials.

Obama once promised to re-negotiate the outsourcing-friendly North American Free Trade Agreement (NAFTA), which he criticized on the campaign trail. Here’s a copy of a mailer that Obama used during the 2008 election to talk about his opposition to NAFTA: 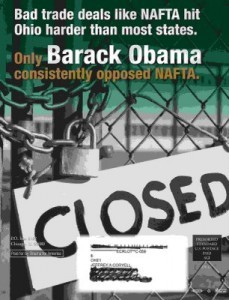 Shortly after taking office, Obama announced that he would not be doing this. His administration then went on to push for trade deals with Colombia, Panama, and South Korea that are predicted to cost the loss of over 200,000 American jobs.

Despite strong opposition from a majority of House Democrats, these deals were passed into law and are currently in the process of being implemented.

So, as the record stands, President Obama, too, is also supportive of outsourcing. But Obama did not pass these trade deals alone. He had strong backing from many Senate Democrats and from most of the Republican party. This support materialized despite the fact that there is strong public opposition to “free trade” policies that privilege investor rights and do not protect worker and environmental rights.

Powerful lobbies continue to push for a regulatory and trade structure that promotes outsourcing. As we covered earlier this year, one group alone, the  Automotive Free International Trade Political Action Committee, spent $696,000 on campaign contributions during the debate over the South Korean trade agreement. Of the 148 candidates it supported, only three went on to oppose the deal.

Meanwhile, most major American corporations, their trade associations, and their lobbyists backed these trade agreements. The Chamber of Commerce, Microsoft, Dow Chemical, General Electric, Citigroup, and others signed on in support, and there was no organized lobbying force fighting the agreements except a segment of the labor union movement and human rights and environmental groups (who are outmatched in resources and lobbying firepower by those big corporate interests).

But the pro-outsourcing lobbyists are not through hollowing out America’s manufacturing base. The Huffington Post reported earlier this month that the Obama administration is secretly working with lobbyists to pass a new trade agreement that could have devastating effects on labor and environmental rights, and open up a whole new avenue for outsourcing. This agreement could be stopped or altered to promote fair trade, but it depends in part on whether the media is prepared to accurately report on the issue.