Did The Obama Administration Funnel Federal Dollars To Lawmakers To ‘Buy’ Votes On Legislation?

This morning the Heritage Foundation’s investigative reporters, Rob Bluey and Lachlan Markay, published an interesting article alleging that the Obama administration allocated federal dollars in a way so as to “buy” the votes of Congressional legislators on certain key pieces of legislation.

The authors focus on the discretionary budgets of various federal agencies, which can freely dole out grants to lawmakers. They find that grants to House members spiked around the time of three critical administration priorities: the cap-and-trade bill, the financial reform bill, and the health care overhaul. They chart out this spike: 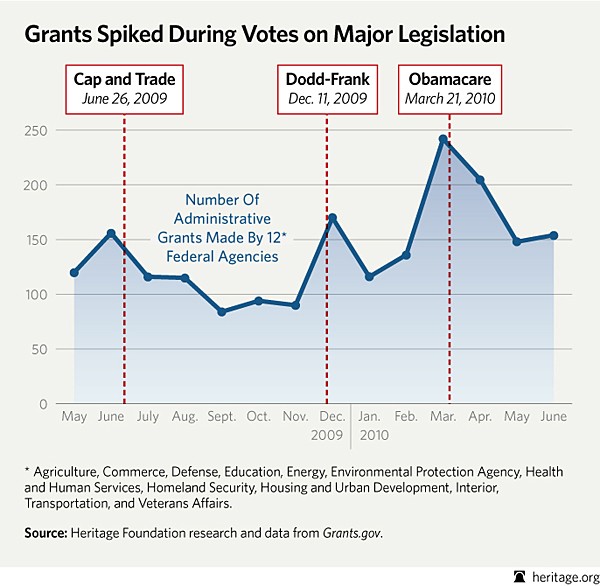 The authors argue that Democrats in swing districts — vulnerable Democrats — were particularly coaxed by these grants. They use anecdotal evidence to note that, for example, Rep. Zach Space (D-OH), voted for the federal cap and trade bill after $1.8 million in federal grants were made to his district the month before. The Heritage Foundation’s Hans von Spakovsky said that Bluey and Markay’s research shows ‘how taxpayer funds are used for crass political purposes — it is a rank abuse of the government’s power and another sign of this administration’s lack of a moral compass.”

While it’s not hard to imagine that these grants were in some cases used to influence votes, it’s difficult to say that the case being made here is comprehensive or ultimately compelling. For one, the authors do not show that grants were disproportionately steered towards vulnerable Democrats whose votes were up in the air (only anecdotal evidence is provided). One of the Democrats listed by the authors, Rep. Alan Grayson (D-FL), was a long-time advocate for the health care bill, and it is unlikely that he needed much prodding to vote in favor.

The authors also do not look at grants that went to Republicans during this period (most of whom voted against the three bills) and how much these spikes in grants can be explained by federal dollars flowing to these lawmakers.

Bluey and Markay’s article is interesting, and certainly should be a starting point for discussion, but their thesis remains unproven.