posted at 1:32 pm by Suzanne Merkelson 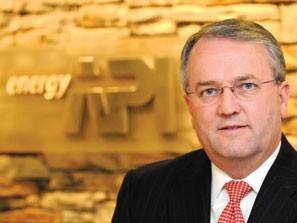 The American Petroleum Institute (API) is the biggest oil and gas lobby group in the country, spending millions of dollars each year advocating on behalf of over 400 corporations who work in the petroleum industry.

So why is its president, Jack Gerard, speaking on behalf of the Obama administration?

The Hill reports that the Interior Department is set to release a new proposal regulating “fracking,” the controversial oil and gas extraction method in which water, chemicals, and sand are injected into rock formations, on federal lands sometime this week. Their source? Gerard, who said, “I expect [the new regulations] will be out tomorrow or Friday.”

The long-awaited new regulations are certain to please Gerard and his oil industry cronies. Bloomberg reports that the rules have been significantly watered down from a version in February, which required companies to disclose the chemicals they would use at least 30 days before work began. This drew ire from industry groups who lobbied aggressively against the rules, including API and the American Exploration and Production Council, who argued that the rule might slow energy production.

The Obama administration listened. The new rules, according to Bloomberg, allow companies drilling on federal lands to wait until after the fracking is completed to disclose what chemicals they used. This is consistent with earlier guidelines established by API.

Keep in mind that some of these chemicals are known carcinogens. Federal officials and environmental groups have expressed concern about public drinking water supplies in areas where fracking occurs.

Gerard told the Hill that he’s happy with the rules:

“We will have to look at all the details, of course; however, there have clearly been some constructive changes. We hope there will be many changes,” he said when asked if the group’s concerns have been addressed.

But he said states should have the primary role in regulating fracking.