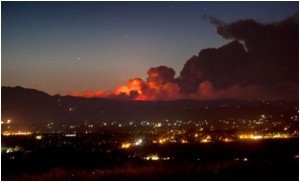 It was so hot in D.C. this weekend that a plane trying to depart from Reagan National Airport actually sunk into melting tarmac. In Colorado, wildfires have destroyed over 600 homes in a matter of days. Meanwhile, the recent “derecho” storm, one so severe it needs a special name, killed at least 23 people and left 1.4 million more without power from Illinois to Virginia. In the last week alone, over 2,000 individual heat records were broken across the country. The National Oceanic and Atmospheric Administration said that this past spring “marked the largest temperature departure from average of any season on record for the contiguous United States.”

This is climate change. And it’s only going to get more intense.

The increase in carbon pollution come from a variety of factors, particularly the burning of fossil fuels. But the rising mercury is most definitely corollated with the rising influence of corporate money in politics.

Despite mounting evidence both that burning of fossil fuels contributes to climate change, and that climate change is harming people around the world, the United States has only seen one significant attempt — a failed attempt — by federal lawmakers to limit the heat-trapping gases, including carbon dioxide, that have been linked to climate change. The American Clean Energy and Security Act of 2009 (also known as Waxman-Markey, after its authors in the House) was approved by the House of Representative in June, 2009, by a vote of 219-212. It later died in the Senate.

Who killed one of humankind’s best chances to save itself from itself? Lobbyists for the industries who profit from warming the planet.

During the 2009 legislative push, pro-environmental interest groups spent a record $22.4 million on lobbying efforts, which, according to the Center for Responsive Politics, is double the average expenditure for the eight years prior.

This was no match for the oil and gas industry, which spent $175 million lobbying against the bill, including $27.4 million from ExxonMobil. As ThinkProgress reported:

Six of the seven companies with the largest lobbying expenditures are Big Oil companies””ExxonMobil (1), ConocoPhillips (2), Chevron (3), BP (5), Koch Industries (6), and Shell (7). Their 18-month lobbying expenditures total $143 million. Their agenda varies among companies, but generally they oppose most proposals to reduce global warming pollution from oil refineries and transportation fuels.