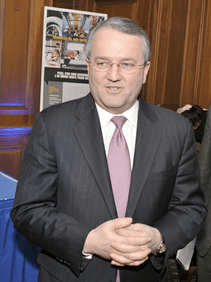 When oil companies need help in Washington, they call Jack Gerard. But in January of next year, assuming he wins the presidency, Mitt Romney may be dialing Gerard for political support. According to media reports in his native Idaho, Gerard is on the shortlist to become Romney’s White House chief of staff.

Gerard is the president of the American Petroleum Institute, the largest oil lobbying associations in the country. Using a budget that is rumored to be in the hundreds of millions (funded by all of the major oil companies, including Chevron, ExxonMobil, etc.), Gerard finances pro-oil propaganda on network television, academic studies to promote his policy positions, front groups to hold rallies in pivotal swing states, and of course a large team of lobbyists from D.C. to over a dozen state capitals across the country. For his work, he’s one of the highest paid lobbyists in the Beltway, making $6.4 million in 2010 alone.

— Senator Jim Risch (R-ID) told the Idaho Statesman that he thinks Gerard may be selected as Romney’s chief of staff. “Gerard is a heckuva player in Washington, D.C.,” Risch told the newspaper. “He’s well thought of, well connected, has incredible street cred. He’s certainly got the qualifications to do any of that.”

— Former Senator Jim McClure (R-ID), Gerard’s former boss when he worked on Capitol Hill, predicted that Gerard would be Romney’s chief of staff had he won in 2008.

— Breaking a tradition of trade association nonpartisanship, Gerard endorsed Romney during the Republican primaries this year, and indicated that he is close to the Romney family.

— Jack Gerard’s son, who shares the same name, is now a spokesman for the Romney campaign.

The Romney campaign, like most political campaigns, has remained largely silent about its future staffing plans.