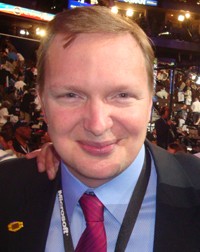 Bloomberg’s Hans Nichols reports that on February 7, one day after Obama’s promise-breaking announcement to embrace unlimited corporate donations for his campaign, Obama campaign manager Jim Messina held a private meeting with top executives from Wall Street. According to Nichols’ sources, Messina told the donors that Obama would not demonize Wall Street during the campaign:

Jim Messina, President Barack Obama’s campaign manager, assured a group of Democratic donors from the financial services industry that Obama won’t demonize Wall Street as he stresses populist appeals in his re-election campaign, according to two people at the meeting.

Many have argued that Obama’s decision to embrace super PAC fundraising is a shrewd political move. But as Republic Report has pointed out, corporate CEOs donate to campaigns often with the expectation that they will get something back in return. Obama may be arming himself for the ad campaign against the Republican nominee, but he’s doing so by selling away his principles and perhaps the public interest.