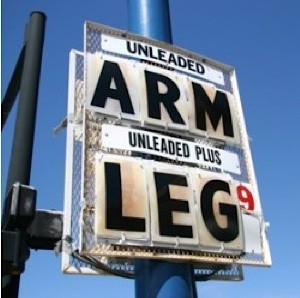 You pay a hidden premium every time they fill up your gas tank. The prices are high at the gas station, but part of the price you pay is directly caused by commodity speculators. And you can thank lobbyists for why the government has been unable to do anything to solve the problem.

Over the years, Wall Street speculators have taken advantage of significant loopholes in commodity trading law — loopholes often written by industry lobbyists — to buy up oil delivery contracts and boost the price of oil. While excessive speculation results in lots of money for investors, it also means that Americans are forced to pay more at the pump.

How much money? Bart Chilton, a commissioner with the Commodities Futures Trading Commission, explained to ABC News how oil reckless oil speculation is rapidly raising the price at the pump for all drivers:

The government, under intense pressure from industry, punted on serious speculation limits. The few limits, called “position limits,” that have been outlined by regulators offer large exemptions and would not even take effect until next year.

Lawmakers from both parties have offered legislation that would compel regulators to impose position limits immediately and for agencies like the CFTC to act now against oil price manipulators. But nothing happens.

Republic Report has reviewed lobbying disclosures and other records to reveal the lobbyists working on behalf of the finance industry to make sure these bills to address excessive speculation never move far in Congress:

The CME Group is “the world’s largest owner and operator” of private exchanges for derivatives products. CME Group specializes in a number of markets, including trading futures contracts for various blends of crude oil and food commodities. Since the CME Group directly benefits from excessive levels of oil speculation, it’s no surprise the company has deployed a small army of lobbyists to defeat several anti-oil speculation bills, including S. 1200 and H.R. 2003. Fishing for campaign contributions, House Majority Leader Congressman Eric Cantor (R-VA) visited the company last year and promised to help rollback regulations that would affect CME Group’s business, including the rules at the CFTC.

Bloomberg reported that the International Swaps and Derivatives Association Inc. and the Securities Industry and Financial Markets Association — trade associations representing companies including JPMorgan Chase & Co., Goldman Sachs and Morgan Stanley — sued to overturn the CFTC commodity speculation rules. Though the firms lost their first battle in court, they are now pressing forward with a second suit designed to slow down the implementation of the regulations. The International Swaps and Dealers Association has over a $55 million budget, much of which goes towards lobbying and other forms of advocacy. The Securities Industry and Financial Markets Association has over 50 registered lobbyists.

The current debate over excessive oil speculation is nothing new. In 2008, lobbyists maneuvered to crush a similar effort to curb out of control oil speculation. A bill that would have empowered the CFTC to regulate speculators was crushed, despite overwhelming evidence that speculators fueled price spikes that year. Despite calls by members of both parties for regulators to do more on commodity speculation, Wall Street lobbyists simply have too much power.

Reforming the way big money influences government might be the last thing on your mind the next time you fill up your tank. But remember, corruption is one of the reasons you’re paying so much.