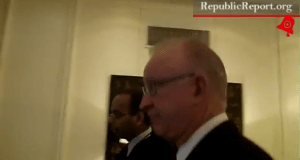 Early this month, the Republic Report’s Lee Fang broke the story that Patricia McKeon, the wife of House Armed Services Committee Chairman Rep. Buck McKeon (R-CA), had taken major campaign contributions from the defense industry in her state legislature race. It is entirely likely that the defense industry is trying to influence the congressman by donating to his wife. As the story has spread, McKeon has failed to fully explain why he thinks this industry is helping fund his wife’s race. Last week, Republic Report attended an insider conference of drone manufacturers, where a number of major defense contractors gathered to discuss their corporate and political strategies. Rep. McKeon headlined the event, and praised the defense industry audience before him that is a major donor to his campaign.

Following McKeon’s speech, Republic Report asked McKeon about the defense industry’s donations to his campaigns. He repeatedly dodged the question and failed to explain why drone manufacturers and other arms producers would be donating to a state legislature race. Watch McKeon refuse to answer our questions: