EXCLUSIVE: Rep. McKeon Praises Drone Manufacturers At Conference After They Lavish His Wife With Donations 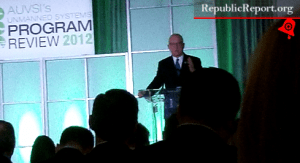 Last week, Republic Report’s Lee Fang revealed that leading defense contractors, including the manufacturers of military drones, were lavishing Rep. Buck McKeon’s (R-CA) wife Patricia — who is running for a state legislature seat in California — with campaign donations. McKeon is Chairman of the House Armed Services Committee, and received $339,000 from the defense industry himself in 2010, so it’s reasonable to suspect that arms manufacturers and others are donating to his wife’s state race in order to please him.

Now, it appears that these donations are paying off. This morning at the Omni Shoreham Hotel in Washington, D.C., Rep. McKeon delivered a “Special Address” for the Association for Unmanned Vehicle Systems International (AUVSI), a drone industry lobbying organization. Republic Report gained access to the event — which hosted hundreds of attendees from the unmanned aerial systems industry, including military drone  manufacturers like Lockheed Martin and Northrop Grumman.

Before McKeon spoke in the main conference room around 8:30 AM, AUVSI Chairman Peter Bale delivered some opening remarks. He praised McKeon for attending the conference and for fighting to include new authorizations for expanded drone use in the United States in the FAA bill. He also commended President Obama for “just last week…making his most public defense of the use of UAS systems,” referring to President Obama’s claim that Predator drone strikes in Pakistan had not “caused a huge number of civilian casualties.”

McKeon was then introduced by a AUVSI staffer. “He’s been in Congress for twenty years. No small accomplishment to be re-elected twenty times,” he boasted. “He’s sponsoring HR 658, which is the FAA authorization bill to promote integration of unmanned systems into the national airspace. And that takes an enormous amount of work every day, congressman, to advocate that.”

As the congressman spoke, he was full of praise for the drone makers. “I want to thank you all for what you’re doing,” McKeon told the attendees. “Let the people know…how much you’re appreciated and how important the work it is you’re doing.” The congressman then pivoted into crediting the drone industry with helping neutralize Osama Bin Laden. “You know, the Navy SEALS killed Bin Laden. But it was a team effort. It was a drone in the sky that gave them much of the intelligence they needed.”

One of the themes of his speech was opposition to defense cuts, even going so far as to say that cutting back on military spending will cost American lives. “In my lifetime, we cut back after every war. We cut back after World War I, that was before my lifetime,” he said to laughter from the defense contractors. “We cut back after World War II. We cut back after Korea. After Vietnam. Every conflict, we cut back the military. Because I guess it’s in our DNA that we would not want to be prepared for the next one. It really disturbs me because if you read history, you’ll see how we lost a lot of people at the start of every conflict needlessly because of lack of preparedness.”

Watch McKeon’s remarks (the camera occasionally pans to the ground in order to remain discreet):


Towards the end of McKeon’s speech, he was interrupted by an anti-war protester demonstrating against civilian deaths in the drone war in Pakistan. After the defense contractors booed and laughed at the protester and she was removed, McKeon explained his foreign policy philosophy to the audience. “Wouldn’t we all like to cut our swords, and pull our ploughshares and live in total world peace? I’ll tell ya, that’s not happening.” Yet what McKeon did not see fit to say is that the swordmakers he spoke before are lavishly funding both his political campaign and that of his wife.