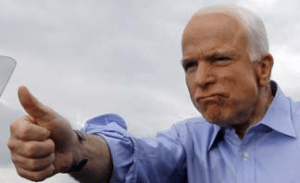 On Meet the Press last weekend, Senator John McCain (R-AZ) harshly rebuked Citizens United, the 2010 Supreme Court decision that unleashed unlimited corporate spending in American elections. McCain was the original author of McCain-Feingold, the legislation partially voided by the decision which placed limits on how much candidates could raise and spend.

Though he remained deafeningly silent when the case was handed down, McCain took the opportunity this Sunday to slam the five Supreme Court justices — Antonin Scalia, John Roberts, Anthony Kennedy, Clarence Thomas, and Samuel Alito — for their “naivety and sheer ignorance” in advancing the “worst decision” in many years:

But just two years ago, McCain was singing a different tune. Just after the court handed down the Citizens United decision, Democrats in Congress worked to pass legislation that would at a minimum require attack groups — both union and corporate-funded — to disclose their donors and reveal the top donors at the end of their advertisements. McCain, however, did not support the legislation, called the DISCLOSE Act.

McCain dropped his reform rhetoric perhaps because he desperately needed campaign cash to defeat a strong primary challenge from the right that year. The U.S. Chamber of Commerce — the big business lobbying group that fought McCain-Feingold in the first place, filed an amicus brief supporting Citizens United, and generally hates any type of campaign disclosure — played a major role in helping McCain lock up his party’s nomination that year against J.D. Hayworth (R-AZ).

I confronted McCain about the contradiction outside of one of his fundraisers hosted by the U.S. Chamber of Commerce a few months after the Citizens United decision. McCain ignored his own hypocrisy, and gave me his signature thumbs-up when I asked why he is palling around with the group most responsible for shredding his campaign finance reform law:

In the end, Republicans, including McCain, voted to kill the DISCLOSE Act legislation by successfully blocking debate in the Senate. Now it seems too late to find a federal fix for Citizens United — at least for the election this year.