This May Day, Remember That Big Money Is The Reason American Workers Don’t Have More Rights — And Income 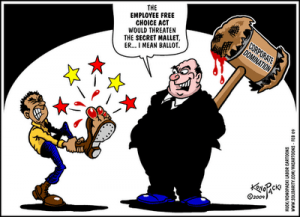 Today is May Day, a global day of celebrations in favor of workers’ rights — and the day that labor unions in the United States marked as their day of action to win an eight-hour workday. Yet as American unions and Occupy activists take to the streets to celebrate our hard-fought rights, it’s important to remember that the United States lags behind the rest of the developed world in its ultra-low unionization rate, with less than one in ten Americans belonging to a union.

In the middle of the 20th century, the percentage of American workers in unions was more than triple what it was today. As the following graph shows, as unionization in America collapsed, so did the middle classes’s share of national income: 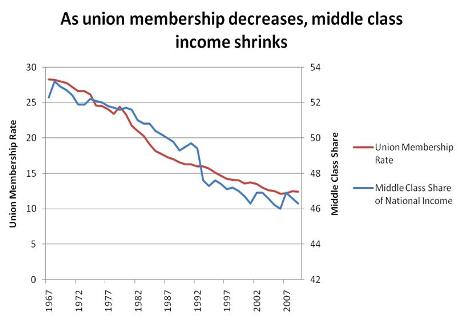 The reasons behind this collapse of unionization — and with it, the American middle class — are many. From the spread of anti-union laws to the expansion of anti-labor trade agreements, the right of Americans to organize has taken a beating — largely from business interests who lobby against them.

But in 2009, there was a brief glimmer of hope for the labor movement. Members of Congress introduced the Employee Free Choice Act (EFCA), which would have made it much easier for workers to organize in their workplace without onerous restrictions or employer intimidation. The millions of Americans who wanted to join unions but were unable to would’ve had a fighting chance to organize.

Almost immediately, Big Money started spending against the measure. By the summer of 2008, business groups had assembled $100 million to spend advocating against EFCA. In the run up to the election, business Political Action Committees (PACs) gave “nearly five times more in campaign contributions than labor PACs did.”

Slowly, congressional support for EFCA faded, and after being watered down it was effectively taken off of the agenda altogether. In 2010, union membership in the United States fell to a 70-year low.

This May Day, as Americans celebrate organized labor and workers’ rights, they should remember that Big Money is responsible for the decline of unions and the American Middle class and that the only way to reverse the situation is to tackle the problem at its root — the corrupting influence of money in politics.