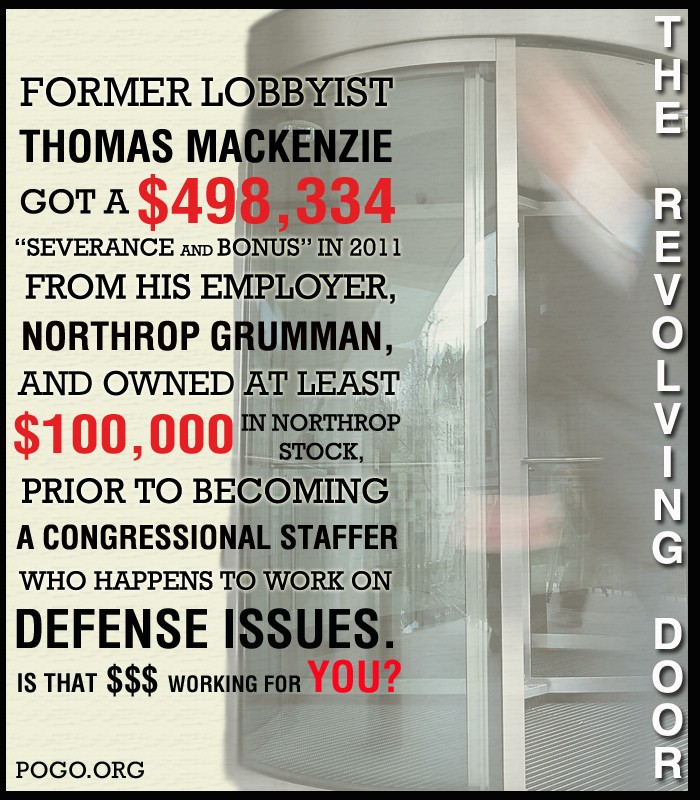 Republic Report has broken a series of stories this month showing that a surprising number of high level congressional staffers either maintain a financial relationship with a lobbying firm, or were paid six-figure bonuses by lobbying firms shortly before becoming staffers last year. We’ve reported on Senator Marco Rubio’s chief of staff, Speaker John Boehner’s policy director, and Thomas MacKenzie, a former Northrop Grumman lobbyist who was paid nearly $500,000 in bonus pay just before being tapped by the House Armed Services Committee as a senior staff member.

As other media outlets take interest in the story, it has been reported that MacKenzie, who has presided over the committee that has attempted to restore billions in taxpayer funding to Northrop-related weapons programs, also reported owning at least $100,000 in stock with his former employer.

Senator Richard Blumenthal has raised questions about ethics of the nearly half million bonus awarded to MacKenzie in 2011, only weeks before Congressman Buck McKeon, chair of the Armed Services Committee, hired the Northrop lobbyist. “The perception is horrible, at a time when the credibility of Congress is certainly in question,” said Blumenthal. “I’m concerned about the integrity of the Defense Department budget if it is tainted by any whiff of a payoff.’”

Credo Action, a progressive grassroots organization, sent a petition today to its members today calling for MacKenzie to resign:

Thomas MacKenzie, a vice president at Northrop Grumman, received a $498,334 bonus just before he went to work as a top policy staffer for Chairman Buck McKeon (R-CA) of the House Armed Services Committee.2 As a congressional staffer, MacKenzie now makes close to $120,000 a year.3

It’s a payment that would have been illegal had it come days later after he officially started work, yet because of the timing it’s perfectly legal. But that doesn’t meant it’s acceptable. Instead it brings to light an astonishing conflict of interest that shatters any semblance of integrity in a committee that controls massive amounts of money and plays a pivotal role in national security decisions.