posted at 1:41 pm by Suzanne Merkelson 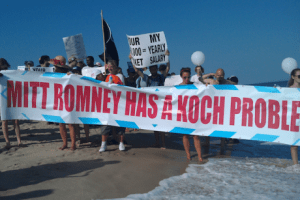 The Washington Post: Romney outraised Obama in June, $106 million to $71 million
(Important to note that these totals don’t include funds raised and spent by outside groups like super PACs!)

New York Times: Democrats to Ask for Curbs on Donor-Shielding Groups
The Democratic Party’s Senate campaign arm will file a formal complaint on Monday with the Federal Election Commission against three of the Republicans’ biggest campaign groups, accusing them of willful violations of federal election law and asking that their electioneering be stopped.

New York Times: Tax-Exempt Groups Shield Political Gifts of Businesses
The secrecy shrouding these groups makes a full accounting of corporate influence on the electoral process impossible. But glimpses of their donors emerged in a New York Times review of corporate governance reports, tax returns of nonprofit organizations and regulatory filings by insurers and labor unions.

The Hill: Outside groups switch election tactics to keep their donors secret
The U.S. Chamber of Commerce, which has been a dominant force in Senate battleground states, has signaled it will switch from issue ads to independent expenditures to keep its donors secret.

The Atlantic: The Best Quotes from Guests at Romney’s Hamptons Fundraisers
“I don’t think the common person is getting it,” she said from the passenger seat of a Range Rover stamped with East Hampton beach permits.
Salon: Crashing David Koch’s party
At a fundraising event held at the Southhampton summer house of oil billionaire and money-in-politics poster boy, David Koch, suggested donations were $75,000 a couple — nothing outrageous for political giving, Hamptons-style (relied upon in recent years by Democrats and Republicans alike). But this Sunday, something not seen in local memory also took a day trip to the Hamptons: a protest, about 200 strong, which ventured to Koch’s beachfront backyard.
Buzzfeed: How Mitt Romney Became the World’s Best Fundraiser
Romney’s schedule offers the clearest glimpse of his priorities. One Midwestern swing aside, Romney has spent the summer largely eschewing swing states for the solidly red and solidly blue precincts of the ultra-rich: He spent a couple of hot June days in Texas, and swung through irreparably Democratic Oregon and Washington. He weekended in Utah, which last voted for a Democat in 1964. He departed his New Hampshire vacation last week for the Hamptons, playground of the New York rich, and heads later this week to fundraisers in the resort country of Montana and Wyoming.

Roll Call: Rules of the Game: Debate Over Corporate Spending Spans Parallel Universes
Are big corporations taking over American elections? It depends whether you ask liberals or conservatives, who can’t even agree on the basic facts.