Political Corruption Enhances the Influence of the One Percent

posted at 7:55 pm by Suzanne Merkelson 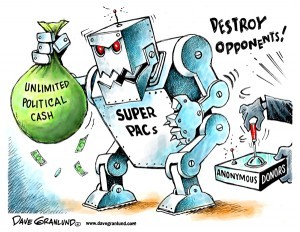 The Atlantic: Big Campaign Spending: Government by the 1%
Here’s what we must come to see: America has lost the capacity to govern. On a wide range of critical issues — from global warming to tax reform, from effective financial regulation to real health-care change, from the deficit to defense spending — we have lost the capacity to do anything other than suffer through a miserable status quo. If there is a ship of state, its rudder has been lost. We are drifting. We can’t change course. And eventually, and with absolute certainty, in waters such as these, a drifting ship will sink.

The Washington Post: ‘The Gospel According to The Fix’: Get to know Carl Forti and the world of super PACs
You’ve probably never heard of Carl Forti. He has never been on television and he’s rarely quoted in the newspaper. But Forti knows the world of super PACs better than anyone in the Republican Party — and that knowledge makes him one of the most important strategists in the GOP heading into the fall election.

NPR: Democrats Say Anonymous Donors Unfairly Influencing Senate Races
At the Democratic Senatorial Campaign Committee, Director Matt Canter says the pro-Republican groups aren’t playing by the rules. The committee plans to file a complaint with the FEC accusing a trio of “social welfare” groups of actually being political committees, abusing the rules to hide the identities of their donors.

Bloomberg: Corporate Exodus Continues From Policy Group
Five more companies are ending financial support for the American Legislative Exchange Council, or ALEC.
That’s according to the civil rights group leading an effort to get corporations to withdraw from the public-policy organization that has championed “Stand Your Ground” and voter-ID legislation. The companies are Deere & Co., CVS Caremark Corp., MillerCoors LLC, Hewlett-Packard Co., and Best Buy Co. Inc., according to ColorofChange.org.