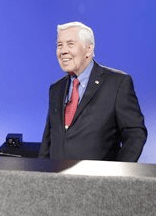 After years of bipartisan policymaking, veteran lawmaker Senator Richard Lugar (R-IN) is expected to go down in defeat in his primary election today. With the likely defeat of Lugar, political observers are sure to start speculating over the meaning of the election. Is it a rebound for the Tea Party? Is bipartisanship dead? Was Richard Mourdock, Lugar’s opponent, unpatriotic for deceitfully smearing Lugar for working with Obama to secure loose nuclear weapons?

These are legitimate questions.

But it’s worth noting that a primary factor in Lugar’s desperate fight for reelection stems from the power of banking lobbyists. The Indiana Republican can be viewed as a demonstration of Wall Street’s political muscle. In the words of Politico, “The banking industry is making an example of Sen. Dick Lugar.”

In a rare loss for Wall Street, the Senate last year rejected legislation to delay a rule to limit the amount banks can charge businesses for credit card swipe fees. The financial industry mounted an incredible lobbying campaign — as Bloomberg reported, banks hired high priced K Street hacks, used conservative blogs like RedState, and developed Beltway advertising — to pass the measure. But a coalition of big box retailers, like Wal-Mart and Target, along with small businesses and other vendors, persuaded enough legislators from both sides of the aisle to kill the measure and limit the fees. The rule affected some $16 billion in bank profits.

Lugar was among the few Republican senators up for reelection in 2012 to vote against the banks. As Anna Palmer and Robin Bravender reported, bank lobbyists decided early on to use the Indiana primary today to make an example out of Lugar:

The ABA supported Mourdock on June 23 — soon after the Senate vote on the swipe fee amendment — sending him a $5,000 check, according to federal campaign filings. […]

“There are just a lot of sour grapes out there,” said a GOP financial services industry lobbyist.

But with more battles over swipe fees on the horizon, bankers want to make it clear that there will be consequences for Republicans who vote against them.

Lugar has also been pummeled by front groups tied to the financial services industry. The Club for Growth, which is funded by several highly ideological hedge fund managers and investors, has aired numerous attack ads against the senator. FreedomWorks, run by Dick Armey, who served as a bank lobbyist after retiring from Congress and C. Boyden Grey, a current lobbyist working to chip away at Dodd-Frank, also ran anti-Lugar ads.

While Mourdock has campaigned as an insurgent Tea Party candidate, he hasn’t shied away from big bank support. And was Lugar’s vote against the banks motivated by conviction? Lugar’s daughter worked as a top lobbyist for a retail industry group that supports the credit card swipe fee cap. Few candidates ever admit that their own races are really proxy battles for powerful corporations.

In all fairness, though Lugar faces a torrent of financial lobbyist opposition, much of K Street still supports him. A list of recent fundraisers published by the Sunlight Foundation’s Party Time blog reveals that Lugar steadily raised campaign cash from corporate lobbyists nearly every month since last year.

The overwhelming campaign cash mustered by Wall Street, however, seems likely to take down Lugar in the election tonight. It’s no wonder so few legislators stand up to the big banks.