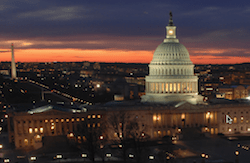 For two years, I worked on Capitol Hill as a legislative aide to Congressman Alan Grayson.  During this time, Congress passed major legislative initiatives, including most prominently health care reform and the Dodd-Frank package addressing the financial crisis.  Lobbyists infested the place, and a lot of the legislative activity was determined by the enormous sums of money sluicing through the system.

I thought it couldn’t get worse, but I recently went back to the House to see how it’s changed.  I wandered the halls in an old suit for a day and ate the same food I ate for two years.  You notice the little things first.

For instance, one minor difference is that Rep. John Boehner insisted that the paper cups people used for coffee were too environmentally friendly, so he had them replaced with big styrofoam cups.  It’s a little touch that is designed to remind environmentalists that they are not welcome in Congress.  It wasn’t a very good taunt, though, since styrofoam cups aren’t used very often anymore what with Starbucks culture infusing both and red and blue states.  It felt like a kind of a 1980s throwback, like someone was trying way too hard to be insulting.

I then encountered a friend of mine who still works there, and he told me about how the legislative environment has changed.

This person said that when he asks Republican staffers about legislation, questions such as “what does this provision do” or “what is this language intended to address”, you know, process-y type stuff that you need to actually understand bills, he doesn’t get an answer.  Instead, a few days later, he’ll get a call from a lobbyist who will say, “Hey I hear you have a question about a bill.”  And now, when he goes to meetings with lobbyists, the lobbyists will have a print-out of this person’s emails in front of them.

That’s how bad it is.  It is now explicitly run by corporate lobbyists, down to the interactions with the opposition.

Now, let’s be clear, Congress is thoroughly corrupt, and it was when I was there.  But when I was there, staffers were somewhat skeptical at the information that lobbyists provided them.  And those who weren’t at least had the good sense to pretend that lobbyists didn’t run the place.  Even if you had to get information from a lobbyist, you would absorb it yourself and then relay it.  Cutting and pasting isn’t really that hard.

Of course, there’s no real moral difference between cutting and pasting from a lobbyist email and just having the lobbyist do the work him or herself.  But what this anecdote shows is that the norms themselves have changed, that it’s not even shameful to directly outsource the work directly to the industries themselves.

These staffers just think they are doing their job.  And I guess in a way, they are.