LINKS: Do We Need Dodd-Frank? That’s A Clown Question, Bro

posted at 3:49 pm by Suzanne Merkelson 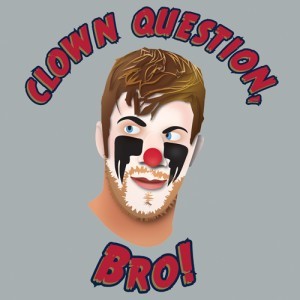 Washington Post: Money gap may not matter so much in November
Obama probably will be similarly outspent in the end, but given the near-parity in bank accounts on both sides, it won’t make much difference.
“Nobody’s going to win or lose this election on the basis of not having enough money,” said Bob Biersack, a senior fellow at the nonpartisan Center for Responsive Politics, which tracks campaign money. “Each of them is going to have around $700 [million to] $800 million available. The idea that that’s not enough is just bizarre.”

Roll Call: Judges Will Rule on Texas Voter ID
The war over this election’s voting rules is heating up, drawing crowds this week to a closely watched federal court trial in Washington, D.C., where a three-judge panel is hearing arguments for and against a contested Texas voter ID law.

Salon: A rich man, poor man election
Over the long term, the rich have been getting richer and the poor poorer. In the short term, the poor took the brunt of the impact of the Great Recession, and were only kept afloat through government assistance. However, as tax rates have fallen to historic lows, it has become more and more difficult for the federal government to find the resources necessary to ameliorate widening inequality.

Roll Call: FEC Gridlock No Help to Obama Campaign
…Obama’s big plans for campaign finance reforms never quite panned out. Despite repeated pleas to Obama from watchdog groups to strengthen or even appoint new commissioners to the Federal Election Commission, the president had other priorities. Now Obama, swamped by unrestricted spending on behalf of his GOP opponent, has asked the FEC for help.

USA Today: 25% of Romney bundlers hail from finance sector
Republican presidential candidate Mitt Romney depends on a wide network of venture capitalists, hedge-fund managers and other Wall Street bankers to raise the hundreds of millions he has amassed in his bid to oust President Obama, a USA TODAY analysis of his fundraising operation shows.

Public Campaign: Scott Brown: Subsidies My Big Oil Donors Get Don’t Exist
Over the weekend, Sen. Scott Brown (R-Mass.) said that “Oil companies don’t get subsidies.” That’s, of course, not true.
Big Oil gets billions in subsidies every year and then rewards supportive members of Congress through campaign cash from their PACs and executives—and Brown is a recipient of that largesse.
In fact, Brown has taken $227,860 in contributions from the oil and gas industry during his Senate career, according to data from the Center for Responsive Politics.

The Hill: Senate Dems offer new version of DISCLOSE Act to fight Citizens United ruling
Sen. Sheldon Whitehouse (D-R.I.) and eight other Senate Democrats proposed new legislation on Tuesday that seeks to counteract the 2010 Citizens United case in which the Supreme Court ruled that the government cannot limit political spending by corporations, unions or other groups.

NY Times: Partisanship Disguised as Charity
For all its right-wing political muscle, ALEC has long enjoyed tax-exempt status as a nonpartisan charity under section 501(c )(3) of the tax code, which is supposed to bar it from influencing legislation as a substantial part of its activities. And because it is a charity, its donors are allowed to deduct contributions from income taxes.
This outrageous situation has to be reversed.

BusinessWeek: How the Mormons Make Money
As a religious organization, the LDS Church enjoys several tax advantages. Like other churches, it is often exempt from paying taxes on the real estate properties it leases out, even to commercial entities, says tax lawyer David Miller, who is not Mormon. The church also doesn’t pay taxes on donated funds and holdings. Mitt Romney and others at Bain Capital, the private equity firm he co-founded in 1984, gave the Mormon Church millions’ worth of stock holdings obtained through Bain deals, according to Reuters. Between 1997 and 2009, these included $2 million in Burger King (BKW) and $1 million in Domino’s Pizza (DPZ) shares. Under U.S. law, churches can legally turn around and sell donated stock without paying capital-gains taxes, a clear advantage for both donor and receiver.

iWatch News: Have you heard about super PACs?
After months of reporting on super PACs and Citizens United, we wanted to know what the average person thought of these new outside spending groups. We spent the Fourth of July at the National Mall in Washington, D.C. to see what people had to say about campaign finance.

Boston Globe: Mitt Romney stayed at Bain 3 years longer than he stated
Government documents filed by Mitt Romney and Bain Capital say Romney remained chief executive and chairman of the firm three years beyond the date he said he ceded control, even creating five new investment partnerships during that time.

New York: Financial Regulator Adopts, Kicks the Rotting Corpse of ‘Clown Question, Bro’ Meme
“Let’s not even talk about 2008 and the financial collapse and the real reason Dodd-Frank came along in the first place. Let’s talk about how MF Global (as some would suggest) got caught trying to steal. Let’s talk about JPMorgan’s losing streak. Let’s talk about Barclays’ balk. Do we need Dodd-Frank? That’s a clown question, bro.”