posted at 12:17 pm by Suzanne Merkelson 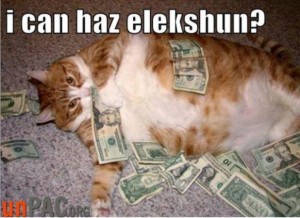 iWatch: Vote set for quixotic bill that would reveal attack ad funders
A bill designed to reveal the donors behind anonymously funded political attack ads is scheduled to hit the floor of the Senate Monday — however, the legislation has virtually no chance of passing, and even if it did pass, it still wouldn’t go into effect until after the 2012 election.
The original DISCLOSE Act — which stands for “Democracy is Strengthened by Casting Light on Spending in Elections” — has been stripped down considerably since it was first introduced in 2010. The newest version is the thinnest yet.

The Washington Post: Expose the fat cats
AMERICANS WHO are worried about the corrosive power of big money in politics ought to watch what is about to happen in the Senate. On Monday, a cloture vote is scheduled on legislation that would require the disclosure of donors anonymously pumping tens of millions of dollars into this year’s presidential and congressional campaigns. Not a single Republican in the chamber has expressed support for the bill, known as the Disclose Act, meaning it will probably die for this session. It should be interesting to hear how the Republican senators justify this monumental concealment of campaign cash.

The New York Times: How to Get Our Citizens Actually United
Voters aren’t interested in “process” issues. They want to know about outcomes. Voters from right to left will tell you, for example, that they overwhelming reject the Supreme Court’s Citizens United decision to allow unlimited, anonymous money to flood our political system. But getting them worked up about election laws isn’t easy. You have to connect the dots to something that matters to them — like the fact that once-middle-class workers have seen their incomes drop by nearly 8 percent in three years and their wealth disappear by a staggering 40 percent. And you have to make sure they believe that the problem is not, as the right would have it, the extravagant pensions of teachers like my 82-year-old mother (who taught for over 30 years before retiring from the Atlanta city schools), but the actions of bankers and C.E.O.’s who’ve engineered a system that is decimating the middle class.

The Washington Post: Mitt Romney attracts big donations from financial industry, including Goldman Sachs and Bain
A new disclosure filing released Sunday night shows that the Republican presidential candidate’s biggest sources of cash in recent months have been top financial firms. Employees of Goldman Sachs Group alone have given $902,000 toRomney Victory, which is a joint fundraising vehicle for Romney and the Republican Party.

USA Today: Romney’s theme: Obama helps his wealthy friends
If Mitt Romney’s theme last week was that President Obama’s campaign tactics are misleading, his latest message is that his Democratic rival engages in cronyism.
In a new web video out today, Romney uses the now-famous clip of Obama singing a snippet of an Al Green hit to stress that the president has helped his donors and supporters at the expense of the middle class.

New York Times: Policy and the Personal
The point is that talking about Mr. Romney’s personal history isn’t a diversion from substantive policy discussion. On the contrary, in a political and media environment strongly biased against substance, talking about Bain and offshore accounts is the only way to bring the real policy issues into focus. And we should applaud, not condemn, the Obama campaign for standing up to the tut-tutters.

NPR: Nov. Election: How Much Does Fundraising Matter?
Steve Inskeep talks with two political strategists on whether a fundraising advantage matters in this presidential campaign. Mark McKinnon advised George W. Bush and John McCain’s campaigns. Mark Mellman is a democratic pollster and adviser.

OpenSecrets Blog: Overdue Disclosure: Mitt Romney Should Identify His Bundlers
Campaign bundlers fuel the modern presidential campaign. Faced with having to raise huge amounts of money but up against strict limits that allow an individual to give no more than $5,000 (and that’s for the primary and the general election), campaigns recruit bundlers to bring in these relatively small personal donations from tens of thousands of supporters and turn them into the hundreds of millions that make the campaign go.

The American Interest: Five Delusions About Our Broken Politics
Interest-group politics influence policymaking in Congress, and the financial resources that interest groups bring to bear on the election of its members are a very important, but by no means only avenue of that influence. Economic interests like corporations, the Chamber of Commerce, community bankers or labor unions can mobilize constituency support or opposition; hire former members, congressional staffers, and other seasoned operatives to gain access and deploy policy expertise within their lobbying operations; and invest heavily in shaping the broader policy community. Groups like the National Rifle Association and the AARP can mobilize powerful collections of single-minded and passionate members and followers to alert lawmakers to the consequences of failing to heed their message. Campaign donations and expenditures are a relatively small part of the resources they invest in government relations.