The Supreme Court opened up the gate for corporations to spend unlimited amounts in campaign advertisements this election, but most businesses have opted to spend using undisclosed front groups, particularly the U.S. Chamber of Commerce. The Chamber spends early and often to elect pro-big business candidates across the country. The ads, however, can be misleading.

A few weeks ago, the Chamber launched an ad — anonymously funded with corporate cash — to promote Linda Lingle, a Republican running for U.S. Senate in Hawaii. Many view the open seat as the best chance in a generation for the GOP in the state.

The ad touts Lingle as a “bipartisan leader” who knows how to work with the Obama administration. The source for the claim? In small print at the bottom of the ad, the Chamber cites a Hawaii Reporter article on January 19, 2012. The piece on that date is a press release “Submitted by Linda Lingle’s Senate Committee” — written by the candidate’s staff, not a reporter. View a screenshot below:

View a screenshot of the ad below: 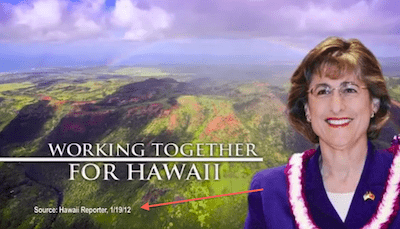 Notably, the “Hawaii Reporter” is hardly even a real news outlet. The website is part of a network owned by the Franklin Center, a front run by former employees of Koch-owned political groups.

The Chamber isn’t afraid to use its deep coffers to misinformation — as long as such spending helps elect a candidate that fits the Chamber’s policy agenda.

During the 2010 midterms, the first major election after the Citizens United decision, the Chamber is believed to have spent money on race-baiting ads during a Democratic U.S. Senate primary. Many Chamber ads were criticized by nonpartisan watchdog organizations for outright falsehoods. In some cases, local television stations refused to run the Chamber’s blatantly deceptive attack ads.