We Know One Thing About The 30 Senators Working To Repeal EPA Mercury Safeguards: They’re In The Pocket Of Big Energy 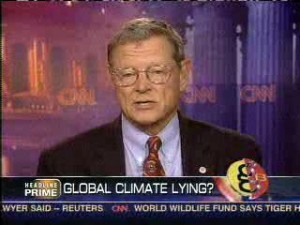 Before June 18, the Senate is expected to vote on a proposal to repeal recently-issued safeguards on mercury and other toxic chemicals released by U.S. power plants. Senator James Inhofe (R-Ok.) claims to have the support of 29 of his colleagues in undoing these Environmental Protection Agency (EPA) mandates — 30 being the magic number to force a full vote on the issue according to Senate rules. But Inhofe won’t name his supporters in the Senate, despite the protests of the National Resources Defense Council.

While we will eventually find out just who these 30 lawmakers seeking to undermine public health are, in some ways, it just doesn’t matter. Of course Inhofe has the support of a good chunk of his colleagues. This is, after all, the dirtiest Congress in history, according to Oil Change International. Oil, coal, and gas companies have spent at least $43.5 million influencing federal elections since January 2011 — that’s $96,000 a day. Meanwhile, earlier this year the Senate failed to get 60 votes needed to eliminate $24 billion in taxpayer subsidies for the five richest oil companies — a sad truth that environmental leader Bill McKibben attributed solely to the whopping $24 million in campaign contributions from the oil industry pocketed by the 41 senators who voted against the bill, compared to just $6 million received by the 57 who voted for the bill.

Inhofe is one of the worst offenders in the Senate, accepting $1.3 million in campaign contributions from dirty energy interests since 1999 — and voting for them 100 percent of the time. A recent email from an Inhofe staffer even called the oil and gas industry “partners.”  With cash like that, is it any surprise that he was able to find so many allies to help protect polluters at the expense of the public good?