posted at 12:07 pm by Suzanne Merkelson 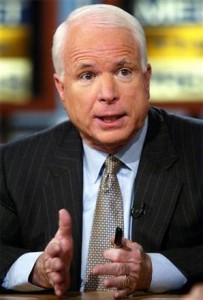 Maverick, indeed. Despite being a prominent Mitt Romney surrogate, Sen. John McCain (R-AZ) criticized one of the Republican presidential contender’s super PAC sugar daddies and questioned whether the millions of dollars Adelson is spending on the election is considered “foreign money.”

“Much of Mr. Adelson’s casino profits that go to him come from his casino in Macau, which says that obviously, maybe in a roundabout way foreign money is coming into an American political campaign… That is a great deal of money, and we need a level playing field and we need to go back to the realization… that we have to have a limit on the flow of money and corporations are not people.”

Donations from foreigners, overseas companies, and governments are illegal and have been since 1966, even in the Wild West world of super PACs. But thanks to toothless disclosure requirements and 501(c)(4) loopholes, foreign donations could easily slip through the cracks. As Trevor Potter, former Federal Elections Commission (FEC) chairman and attorney to Stephen Colbert, told the Huffington Post, “Clearly it is more difficult to enforce the ban on foreign spending when the source of the money is not publicly disclosed.”

After the 2010 Citizens United Supreme Court ruling, President Barack Obama warned during his State of the Union speech: “I don’t think American elections should be bankrolled by America’s most powerful interests, and worse, by foreign entities.”

Sheldon Adelson earned a good chunk of his tremendous fortune in China. While he initially bankrolled Newt Gingrich’s doomed campaign, he announced yesterday that he will be giving $10 million to Restore Our Future, the pro-Romney super PAC. His future contributions could be “limitless.”

McCain has long been a critic of big money in politics, calling Citizens United “”the most misguided, naïve, uninformed, egregious decision of the United States Supreme Court in the 21st Century.” Alongside Sen. Sheldon Whitehouse (D-RI), he recently filed a friend of the court brief, urging the Court to let stand Montana’s ban on corporate money, despite Citizens United.

McCain’s 2008 presidential campaign took money from Sheldon Adelson and his family, which, according to McCain’s current logic would also be considered foreign money.