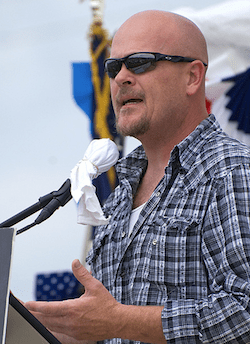 Samuel Wurzelbacher became better known as “Joe the Plumber” after he confronted then-candidate Barack Obama in 2008. Wurzelbacher told Obama that his tax policies would impact his ability to create a small plumbing business.

Wurzelbacher, now a candidate for Congress, never founded that business. But he has continued playing up his plumbing background. “I’m counting on your support because, as a plumber, I’m not going to be able to write my campaign a check,” writes Wurzelbacher in a recent campaign e-mail.

But he’s put down the plunger for the podium. Wurzelbacher has no plumbing income in the last two years. Rather, he’s been earning a modest income as a speaker for lobbying groups and political causes, many of which are funded by corporate interests.

According to financial disclosure forms collected by Republic Report, Wurzelbacher has made over $140,000 in honorarium fees — his only reported source of income since 2010. Like many candidates for office all over the country, including Democrats and Republicans, Wurzelbacher’s working class persona conflicts with his influence peddling income.

Here are some of the most interesting fees:

— Dezenhall Resources, an aggressive lobbying and public relations firm, has paid Joe the Plumber at least $10,000 in speaking fees. Although Dezenhall does not disclose its clients, they have worked in the past for the payday lending industry, the American Chemistry Council (which represents firms like DuPont), and Eli Lilly, the drug company. Greenpeace alleges that Dow Chemical hired Dezenhall to plant spies within its organization. Dezenhall paid Wurzelbacher two years in a row.

— Americans for Prosperity, the group financed in part by the billionaire Koch brothers and led by the astroturf lobbyist Tim Phillips, has paid Joe the Plumber at least $32,000.

The disclosure forms reviewed by Republic Report indicate that Wurzelbacher has forgone plumbing for a career as a political speaker, one closely tied to special interests that might be looking for payback if Joe the Plumber becomes Joe the Congressman. The closest Wurzelbacher came to professional plumbing in the last three years was a speech to Wolverine Brass, a toilet-making company. He was paid $6,000 for the speech.

Click more to view a copy of the disclosures: