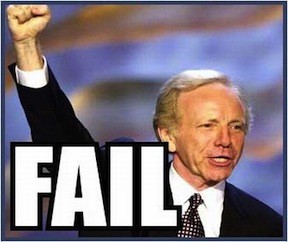 Senators Joe Lieberman (I-CT) and Susan Collins (R-ME) are leading an effort to keep more secret money in our election system. Two weeks ago, a Senate panel approved a bill that would prevent the public from learning about which taxpayer-funded companies are funneling money into political campaigns. As Mother Jones’ Gavin Aronsen notes, the legislation is the latest effort in a big business-fueled lobbying campaign to block a presumptive executive order from the Obama administration that would force government contractors to reveal their campaign donations.

On the Citizen Vox blog, Rick Claypool explains how the law, which is disingenuously titled “Keeping Politics Out of Federal Contracting Act,” would work:

Here’s how things work in the real world: If corporations like Lockheed Martin or Academi (formerly Blackwater) want to pour millions to elect a candidate they think will reward them with government contracts, then they will find a way to make sure that the candidate knows. All KPOFCA does is keep the public, not politicians, in the dark.

It should come as little surprise that most of the bill’s co-sponsors are known enemies of clean elections — like Senator Mitch McConnell (R-KY), who recently submitted a brief to the Supreme Court calling for Citizens United to be upheld.

But Lieberman’s efforts to pass the bill can be seen as a reversal of past positions. In 2000, Lieberman worked closely with then-Senator Russ Feingold (D-WI) to propose legislation that would bring transparency to corporate and union cash in elections. In a speech on the Senate floor, Lieberman called secret donations “indefensible”:

LIEBERMAN: We’ve seen increasing use of the most egregious violation of the clear intention of our campaign finance laws, so-called 527 organizations that not only invite unlimited contributions from corporations, unions, and individuals, but, keep them a secret!

Finally, we have come to a point in our campaign finance laws that members can no longer defende the indefensible. This is a victory for common sense, for our democracy, for the public’s right to know. It has value in itself, but I hope it will also be a turning point that will lead us to further reform of our campaign finance laws. […] I hope and believe that the debate tonight and the vote tomorrow is the beginning of finally returning some limitation, some sanity, some disclosure, some public confidence to our campaign finance laws.


Why is Lieberman flip-flopping on disclosure? It might relate directly to Lieberman’s retirement, which will come at the end of this year. As Republic Report has covered, one of the biggest forms of legalized bribery in Congress is a dynamic we call “Backdoor Bribery.” That’s when a lawmaker indicates that he or she will retire, then begins making special deals or proposing targeted giveaways in Congress so that lobbyists or private entities will pay them million-dollar salaries when they leave Congress. Senator Evan Bayh (D-IN) blocked labor reform in his last term in office, then went to work for an anti-labor lobbying group after he retired. Senator Judd Gregg (R-NH) blocked derivatives reform in his last year in Congress, and now works for Goldman Sachs. Lieberman’s office told Republic Report earlier this year that he would not disclose any current job negotiations with lobbyists. But he is spending a great deal of time partying with K Street influence peddlers, many of whom represent firms that would be impacted by the campaign disclosure executive order.