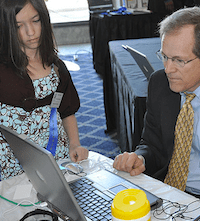 The rush to spend campaign cash is only getting started. During the Republican primaries, as both candidates and Super PACs flooded the early states with money, so many ads were purchased that local television stations ran out of space to sell. In South Carolina, Rick Santorum was forced to buy campaign spots during television shows that regularly lampooned him, like Saturday Night Live.

Now, Campaigns & Elections is reporting that political campaigns are already buying up all the ad-space on highly trafficked websites:

The mushrooming of issue advertisers this cycle, combined with the presidential race is expected to put a severe strain on ad inventory. How bad could things get? In addition to shortages of coveted broadcast TV ad time, we could see online inventory get gobbled up, too. “Scarcity will definitely be an issue,” says Sean Harrison, an account executive with Google’s elections and politics team.

Buying for the fall has already started and inventory on high-trafficked sites is going fast, says Harrison, speaking during C&E’s CampaignTech conference Friday. “It’s a pretty tough market — we’re not even in May yet and campaigns are already thinking so forward.”

With 2012 set to be the most expensive election bought and sold, it’s likely much of the campaign cash will flow into areas of untraditional electioneering. For instance, the Koch brothers last cycle spent a large sum of undisclosed funds on bus tours.