In Latest Press Release, ALEC Claims To Be ‘Transparent, Open’ 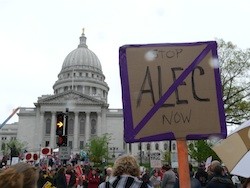 The staff of the American Legislative Exchange Council (ALEC) have been responding to a firestorm over the exodus of major corporations from the organization thanks to increased attention on ALEC’s role in pushing the controversial “Stand Your Ground” law that allowed Trayvon Martin’s killer George Zimmerman to escape prosecution for 40 days (and other particularly despicable legislation). Yesterday, ALEC sent out a press statement complaining that it was being targeted by an “intimidation” campaign that is trying to “eliminate discourse.”

As if that argument wasn’t phony enough, today’s press release from ALEC Executive Director Ron Scheberle, responding to “the support the organization has received in response to the intimidation campaign against its members” is a blatant attempt to rile up conservatives:

“Over the last 24 hours, ALEC has been inundated with letters of support from elected officials, community leaders and concerned citizens in response to the intimidation campaign launched by a coalition of extreme liberal activists committed to silencing anyone who disagrees with their agenda.

What’s even worse comes later in the press release, a duplicitous claim to transparency:

“Finally, now more than ever, America needs organizations like ALEC to foster the discussion and debate of policy differences in an open, transparent way and not fall back on bullying, intimidation and threats.”

ALEC is an organization that is anything but transparent. According to the Center for Media and Democracy’s ALECexposed site (which only exists, of course, because ALEC’s tactics of passing model legislation are so secretive), ALEC maintains a “trove of over 800 “model” bills and resolutions secretly voted on by corporations and politicians” that “reveal the corporate collaboration reshaping our democracy, state by state.” ALEC legislation has pervaded each state legislature in the country “but without disclosing to the public that corporations previously drafted or voted on them through ALEC.”

For a better idea of what “transparency” means to ALEC, check out this video my colleague Lee Fang made with ThinkProgress’ Scott Keyes after they tried to attend ALEC’s conference in New Orleans last year:

Republic Report’s primary concern about ALEC is how the group and its corporate membership uses money to secretly fund their agenda, shielding their strong dominance of state legislators from the public and the media, and even from the companies’ own shareholders, customers, and employees, who don’t know that their money is being used to fund an agenda that is so often harmful to them.

ALEC and its corporate membership — which still includes Wal-Mart, ExxonMobil, State Farm, and GlaxoSmithKline — should practice this same transparency that ALEC is suddenly preaching.