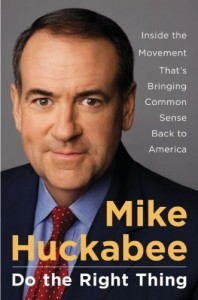 A Simple Government. To our surprise, the former Arkansas governor quoted a statistic produced by the Republic Report on how members of Congress enrich themselves by becoming lobbyists. In March, we took a look at the salaries of members of Congress who have retired and become lobbyists, and found that on average, they increased their pay by 1,452%.

HUCKABEE: A fascinating figure: when a person leaves Congress, the average member of Congress who leaves Congress becomes a lobbyist, and his income goes up $1,472%, fourteen times what he made in Congress. The problem is, people go to Congress, they stay there forever. We don’t get them in, get them out, make them go home. And it’s like the roach motel. They get in, but we can’t get rid of them. Once we, if we vote them out, they don’t go home and say ‘gee I’m see the way I voted.’ They stay in Washington and become lobbyists and multi-millionaires lobbying the very people they used to work with. It’s just outrageous. So that’s what has to change.

Huckabee has given voice to many Americans who feel frustrated with the corruption in Washington DC. Earlier this year, he denounced the rise of Super PACs and other secret campaign groups. “I wish that every person who gives any money [to fund an ad] that mentions any candidate by name would have to put their name on it and be held responsible and accountable for it,” Huckabee noted on Fox News. “And its killing any sense of civility in politics because the cheap shots that can be made from the trees by snipers that you never can identify,” he added. “It’s just the worst part of this process.”