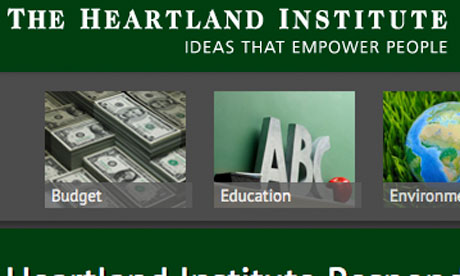 This week, climate blogs including DeSmogBlog and ThinkProgress Green uncovered a leaked documentprecious to public interest advocates: a confidential memo and fundraising plan from the “conservative” Heartland Institute that lists its corporate donors, as well as the group’s strategic plans.

Heartland is one of many so-called “conservative” think tanks that “promote[s] free-market solutions to social and economic problems.” The document exposes what everyone knows, but is rarely proven: that Heartland and other “free-market” think tanks are nothing but lobbying vehicles for the largest corporations and billionaires who own them. These groups were the lead actors in the D.C. dramas that killed consumer protections that could have prevented the banking crisis, the Gulf oil spill, tax breaks for millionaires, and countless other affronts against America’s middle class. They are the secret agents artfully promoting the agendas of Big Insurance, Big Pharma, Big Phone and Cable, and anyone else who ponies up the cash. The leaked documents even admit that Heartland’s funders “want project-specific proposals”

Real conservative Americans should be seriously pissed off about this. Think tanks like Heartland falsely brand themselves as conservative while blindly espousing a free market free for all that history proves — over and over and at extreme cost to society — as untenable: a fig leaf that covers their real goal of destroying any consumer protections that could hurt profitmaking and the consolidation of wealth into the hands of billionaires. Reporters and pundits hear this: they are corporate, not conservative think tanks.

Polls show that conservatives are already outraged at how Big Money buys laws and the politicians who vote for them. Conservatives should be equally outraged that these think tanks and corporate-pawn politicians who do their bidding are co-opting their conservative brand to undermine the public interest. Agreat video from the Conservative Political Action Conference (CPAC) last week shows Tea Partiers and Occupiers agreeing that crony capitalism is the issue that unifies them.

In the big scheme of things, Heartland Institute is a small player, with an annual budget of just $6 million.Heritage Foundation rakes in $75 million a year to shill for corporations; American Enterprise Institute, around $30 million, and the list goes on. What the leaked documents prove is what everyone in Washington knows: most Washington think tanks are a who’s who of the major corporations that own American democracy. And they are the same corporations that are increasingly buying favor at liberal institutions like the NAACP and Sierra Club.

This problem is but one piece of the larger crisis facing America in 2012: the capture of government — and both major parties — by well-heeled special interests. While we would all like a simple fix, the reality is that the solution is more complex. We must advance a range of reforms: from limiting super PACS, campaign spending and contributions to requiring full transparency of all political spending, including think tanks like these. From blocking the “revolving door” of politicians and K Street, to fixing the gerrymandering of congressional districts. From increasing voter participation to fixing antiquated legislative and election rules like the filibuster and the electoral college.

Complex, yes, but a common sense reform agenda is emerging that must be foisted upon our nation’s leaders with the brute political cudgel of pure populism: the same kind that ushered in the greatest political triumphs dating back to the birth of the republic. No, America, our leaders will not fix this problem out of the goodness of their hearts. If we want the republic to survive and thrive, it’s up to us to force them.