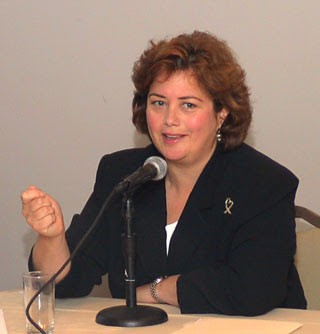 Rosen’s remarks have set off a firestorm in the media. As press outlets rushed to cover the controversy, they frequently referred to her as a “Democratic Strategist” or as an adviser to the Democratic National Committee.

But that’s typical Washington. Rosen is indeed a Democratic Party stalwart.  But her real job — the way she has made money for a long time — has been advocating for the positions of wealthy corporations, sometimes to the detriment of consumers, including those hard-working stay-at-home parents.

As head of the Recording Industry Association of America (RIAA), Rosen engaged in hyper-aggressive lawsuits and other tactics to force the closure of the popular file-sharing service Napster. She also pushed for draconian laws like the Digital Millennium Copyright Act that helped stifle free expression and fair use of files.

Rosen currently works at SDKnickerbocker, a “strategic communications and public relations” firm that fronts for powerful corporations like the controversial Washington Post-owned Kaplan subprime for-profit colleges and food companies looking to weaken the administration’s nutrition goals. In 2010, the Huffington Post severed all ties with Rosen after it was revealed that she was working as a consultant for BP — the oil giant that had just been responsible for a massive and devastating oil spill in the Gulf of Mexico.

Rosen was wrong to attack Romney’s respectable decision to be a mom. But the media should paint a more complete picture of who Rosen is.