Has The Washington Post Company’s Membership In ALEC Affected Its Reporting?

posted at 8:45 am by Suzanne Merkelson 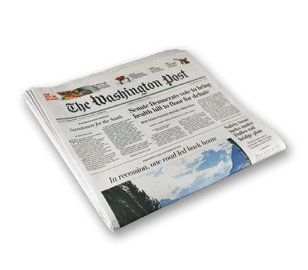 My colleague David Halperin reported last week that the for-profit college division of the Washington Post Company’s Kaplan subsidiary was a member of the American Legislative Exchange Council (ALEC) for one year, ending in August 2011. He makes the case that we shouldn’t be surprised that for-profit colleges, which receive the large  majority of their revenue from federal financial aid yet still rip students off, would be members of ALEC:

Are you surprised to learn that these subprime schools joined the now-discredited ALEC, the secretive group that connects corporate special interests with campaign contribution-hungry state legislators in order to dominate lawmaking at the state level? No, you probably aren’t surprised. Much of the action on for-profit colleges takes place at the federal level, where the money comes from, but states are increasingly taking an interest in protecting their residents from predatory practices – through accreditation of schools, investigations of fraud, and other oversight. So for-profit colleges have come to ALEC to seek influence at the state level.

But among the for-profit college companies he names as ALEC members, Kaplan is unique in that it is essentially the cash cow for one of the most important newspaper companies in the country — the Washington Post. So it raises the question — has the newspaper company’s membership in ALEC affected its ability to report on the organization objectively?

The Post has faced similar criticism regarding its coverage of the for-profit college industry at a time when Post Company CEO Donald Graham has been personally lobbying the White House and Congress to weaken legislation aimed at holding Kaplan and other for-profit schools accountable for waste, fraud, and abuse. But the ALEC disclosure adds a new dimension.

A search of the Post’s reporting on ALEC reveals that during the one year that Kaplan (and thus the Washington Post Company) was a member of ALEC the paper mentioned the organization 12 times on its website, including four instances where ALEC was mentioned in print (according to LexisNexis and the Post’s own site). Not once did the Post disclose its own relationship with ALEC.

In April 2011, the Post reported on voter ID legislation pushed by ALEC:

At least 32 states are considering new or tougher requirements for voter identification at the polls. And 3,000 bills targeting pension reform for public-sector employees are in hoppers nationwide, many of them modeled after legislation proposed by the American Legislative Exchange Council, a conservative think tank that helps legislatures shape fiscal policy.

The voter ID model bills drafted by ALEC effectively disenfranchise “disabled, low-income, elderly, people-of-color, and student voters, by requiring all voters show a state ID at the polls — even though counties have traditionally even though counties have traditionally accepted other proofs of residence without any significant problems,” according to the Center for Media and Democracy. ALEC purports to stand for individual liberty and free markets, an agenda belied especially by voter ID laws, which explicitly take away individual rights with the apparent aim of benefiting conservative politicians.

While it’s entirely possible that the Post’s reporters were unaware of the Post Company’s membership in ALEC, the newspaper’s failure to disclose is a disservice to readers and a lapse in journalism standards.

By comparison, the New York Times, a newspaper that’s larger than the Post but with similar scope and focus, wrote about ALEC eight times in its print edition during that same time period. It editorialized on ALEC and new voter ID requirements, calling them “unnecessary and will suppress the vote.”

The Post has reported on the recent exodus of corporations leaving ALEC. Notably, Erik Wemple’s media blog recently reported on NPR reporter Peter Overby having had worked for Common Cause, an activist group campaigning against ALEC:

NPR reporter Peter Overby is getting hammered by Breitbart.com and Mediaite.com for an apparent ethical breach. The alleged offense is a failure to disclose. Overby did a story April 19 on the attacks against the American Legislative Exchange Council (ALEC), a conservative group that has recently received heavy newsrotation. Among ALEC detractors mentioned in the piece is Common Cause, which Overby calls a “good-government group.” [emphasis my own]

Will these organizations pick up on the Post’s ethical breach? Will the Post itself address the issue?

(Full disclosure: I was an employee of the Washington Post Company until last year at Foreign Policy magazine)