Gov. Hickenlooper Won’t Back Away From Oil And Gas Lobby Ad 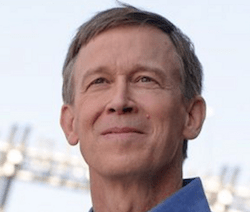 Earlier this week, an oil and gas company lobbying group began airing radio ads featuring a recorded message from Gov. John Hickenlooper (D-CO). During the ad, Hickenlooper says that there has never been a recorded incident of groundwater contamination associated with fracking or drilling in his state. This record and the state’s existing fracking regulations, Hickenlooper says, proves that the “industry and the conservation community can come together to solve problems.”

Our Colorado Blog and ThinkProgress reported that 13 local environmental groups sent a letter to the governor, highlighting to conflict of interest in appearing in an industry ad while noting that there are multiple reports of contamination relating to fracking. Last year alone, the Denver Post reported 58 cases of groundwater pollution linked to spills and releases. As Republic Report’s Zaid Jilani observed, “the spot is particularly remarkable because it is almost unheard of for a sitting governor to appear in a radio commercial sponsored by a certain industry.”

On Friday, the governor’s office responded with a statement apologizing to the environmental community for not reaching out before the ad was crafted. Hickenlooper’s office, however, declined to retract the ad.