posted at 11:59 am by Suzanne Merkelson 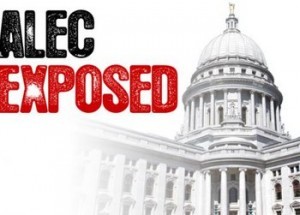 Two more major companies have joined the exodus of corporations, organizations, and politicians fleeing the American Legislative Exchange Council, the corporate front group responsible for pushing Stand Your Ground and voter ID laws in states across the country. Yesterday, General Motors and Walgreens confirmed that they will no longer continue their membership in ALEC, according to Common Cause. They join at least 25 other corporations in dumping ALEC, thanks in large part to pressure from activist groups.

Meanwhile, the organization had its 39th annual conference in Salt Lake City earlier this week, certainly a less festive event than in years past due to ALEC’s weakening power and ineffective clean-up attempts. Legislators, lobbyists, and corporate representatives joined a group of protesters from Occupy, the Center for Media and Democracy, Common Cause, People for the American Way, and others in Utah.

Here’s a link to a video from the protests.

Inside the hotel, ALEC discussed model state legislation, including a workshop entitled “Can Tobacco Cure Smoking?” according to the Center for Media and Democracy’s PR Watch. This supposedly  “‘free market’ solution to reducing smoking that would allow tobacco companies to continue profiting off of addiction” is interestingly being supported by current ALEC members, healthcare companies like Bayer, GlaxoSmithKline, Alkermes, along with pharmaceutical trade group PhRMA, all of which are “Chairman” level sponsors of the conference.

Pulitzer Prize winning cartoonist Mark Fiore also is out with a new School House Rock-esque video describing how a bill becomes a law — ALEC style. It’s worth a watch (or two):