Georgia Voters Of Both Parties Revolt Against Corruption 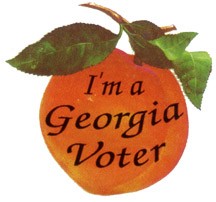 Imagine if lobbyists could give virtually anything they wanted to lawmakers, ranging from a gift basket of cookies to a Mercedes Benz.

This isn’t some dark fairy tale. In Georgia, it’s reality. Lobbyists can give virtually whatever gift they want to lawmakers.

But in recent month, a rowdy coalition of tea partiers and progressives have been campaigning to place a modest cap on these gifts that lobbyists can give to legislators — $100 value per gift.

Last night, in the statewide primary election, voters in both parties overwhelmingly approved of non-binding ballot questions approving of such a lobbyist gift cap. Here’s a snapshot of the results:

Now that voters of both major political parties have spoken, lawmakers have little excuse not to act. But if Georgia’s legislators don’t act, this trans-partisan coalition can throw them out office.

Down South, the fire for real changes to the system has been lit. Where it goes depends on the organizing strength of grassroots leaders on both sides of the partisan divide.