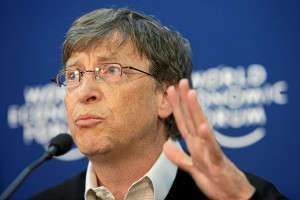 The Washington Post Company seems on the verge of turning its flagship newspaper into a brochure for the company’s controversial, taxpayer-funded for-profit college division, Kaplan. The latest participant in this process is one of the world’s most accomplished men, Bill Gates. At a time when veterans groups, state attorneys general, and others are seeking reforms to prevent abuses by for-profit schools, Gates recently published — in the Post — an enthusiastic review of a book by Kaplan’s CEO. Gates failed to inform readers that the finances of his own Bill and Melinda Gates Foundation are linked to the Post / Kaplan’s profits.

Gates’ review of “Change.edu” (Kaplan Publishing) lauds Kaplan, Inc. CEO Andrew Rosen for making “a persuasive case” that traditional colleges are doing a poor job serving non-traditional students. Gates finds Rosen’s “insights truly important.” Gates acknowledges that there are critics of the for-profit education sector, and he offers one mildly critical comment of his own, saying that “for-profit schools must do better at graduating students with a degree that is valuable in the marketplace.” However, Gates concludes that Rosen does “an effective job” rebutting the critics of his industry.

Rosen granted me a 40-minute telephone interview on Thursday and clearly does think hard about challenges in higher education. But given Kaplan’s own troubling record, a book by its CEO about higher education seems a bit like a book on energy policy by Montgomery Burns.

Does Bill Gates know that:

Gates never even mentions in his review that Kaplan itself has a controversial record.  But in light of this record, how can Gates put his extensive prestige behind the idea that Rosen is a persuasive education thinker?  (Rosen admits that “people inevitably would be skeptical about the head of a private sector company writing about higher education,” but he believes “a book’s arguments rise and fall on their own.”  Some passages in Rosen’s book – such as sections critical of wasteful spending by some traditional colleges – do offer solid analysis, but former Obama Deputy Under Secretary of Education Bob Shireman concludes that other parts unintentionally make the case that the current business model of many for-profit schools is hazardous to students and taxpayers.)

Gates’ review of Rosen’s book offers what he labels “full disclosure” — that Gates’ wife, Melinda, served on the Washington Post Company board from 2004 to 2010.  But there is, in fact, more to disclose, information that is publicly available but that the average reader of Gates’ piece might not know.

The Bill and Melinda Gates Foundation has a stake in the success of Kaplan. Warren Buffett’s Berkshire Hathaway, Inc. is by far the largest institutional owner of Post company stock, with a 20.5 percent share. In 2006, Buffett pledged ten million shares of Berkshire Hathaway, then worth $31 billion, to the Gates Foundation, donated over time. Thirty-eight percent of the entire Washington Post Company’s $4.72 billion revenue for 2010 came from Kaplan’s higher education component.

(Former Kaplan employees have said they were trained to inform prospective students that Kaplan is owned by the respected Washington Post company and that Warren Buffett and Melinda Gates served on the board; Kaplan officials have denied that recruiters were so trained.)

Chris Williams, press secretary for the Gates Foundation, let me know that Bill Gates was not available for comment, but Williams did provide a statement that seemed to pass responsibility for disclosure to the Post:

Bill is certainly concerned about the issues associated with for-profits that you raise, and he acknowledges them in his review of Rosen’s book….On your question of conflict of interest, the Gateses relationship with the Washington Post Company (that Melinda Gates was on the board from 2004 to 2010) was noted. The foundation’s receipt of a gift from Warren Buffet is well known and was certainly something of which the Post editors who worked on this piece were aware. It seems to me that your contention that there should have been additional disclosure is really an issue to raise with the Washington Post, not Bill Gates.

In our interview, Andrew Rosen said that, given Gates’ reputation, it was “absurd” to think that Gates’ review of Rosen’s book might be influenced by a financial relationship.  He also noted that Berkshire Hathaway’s stake in the Washington Post Company (which is 20 percent of about $3 billion) is a very small piece of Berkshire overall ($200 billion).  But the claim is not that Gates has sold his opinions; it is simply that Gates and Rosen are linked in several respects, including financially, and the reader deserves to know.

Bill and Melinda Gates have done extraordinarily good work with their foundation.  And I’m told that Gates, discouraged by waste and inefficiency at traditional colleges, truly believes that for-profit education has the potential to deliver high-quality programs at reasonable prices.  But by flatly invoking as a wise expert the CEO of Kaplan – whose company has spent a decade delivering programs of mixed quality, often at unreasonable prices – Gates does a disservice to the debate, and, more importantly, to thousands of students who have been poorly served by Kaplan. That Gates publishes his endorsement of Rosen’s vision in the newspaper that owns Kaplan, and does so without disclosing that his own charitable foundation has a stake in Kaplan’s success, contributes to the unfortunate nature of the whole matter.

Gates’s book review is, in fact, the second time this month that the Post has devoted space to allowing someone with a financial connection to praise for-profit education.  As I reported, political consultant Bill Knapp penned a Post op-ed endorsing for-profit, online education, but Knapp and the Post failed to disclose that the Post / Kaplan paid Bill Knapp’s firm and his business partner Anita Dunn to help defend the for-profits.

In 2010 and 2011, Post Company CEO Donald Graham led the charge by for-profit colleges to dilute federal rules aimed at making them more accountable for leaving students deep in debt. Graham personally lobbied Obama Administration officials, Members of Congress, and even non-profit leaders, including at my previous place of employment, the Center for American Progress. What Graham brings into the room, of course, is more than the power of a wealthy business; there is also the implicit risk of displeasing an influential news and editorial operation. Kaplan spent $1.36 million on lobbying Congress in 2010-11, and that would not even include any funds spent on non-lobbyist consultants or any contributions to the ubiquitous advertising against the rule.

Although these lobbying efforts, backed by generous campaign contributions from the industry, did weaken the final federal rules, a year of intense public debate led to more government and media investigations and greater public awareness of waste, fraud, and abuse in the industry. Now a bipartisan group of more than 20 state attorneys general are probing the industry, and student enrollment is down.

Seeking to keep profits flowing, the for-profit college industry has increased its focus on signing up active duty military and veterans. But veterans groups are now pressing the White House for tougher rules to protect against predatory practices by for-profit schools.

It’s in this context that the Post seems to be revving up its defense of this troubled industry, in part by publishing articles by financially-connected validators.  In the interview, Rosen touted, as evidence that his company can adapt, the Kaplan Commitment, a money-back free trial period for students that Kaplan announced at the height of the regulatory fight.  The Washington Post Company has the talent and resources to figure out how to make profits off an enterprise that does better for students, preparing more of them to succeed in the economy.   The company could pursue that course, rather than continuing to spend millions lobbying for untenable positions.   If the for-profit education industry does not change, however, it will be up to citizens to demand that elected officials hold these companies accountable, before we face another decade of taxpayers getting shortchanged and of students – veterans, people of color, people struggling to support themselves – having their lives ruined by the bad actors in this sector.