posted at 8:45 am by Lee Fang
Later today, Rep. Fred Upton (R-MI), chairman of the Energy and Commerce Committee, is hosting a hearing about the purported negative effects of Environment Protection Agency’s (EPA) MACT rules. The new rules, which apply to industrial boilers, would place stricter limits on mercury, dioxin, particulate matter, hydrogen chloride, and carbon monoxide — environmental pollutants known to cause infant brain damage and cancer, among other problems.

But before his hearing, Upton is holding a fundraising breakfast with lobbyists seeking to weaken the EPA rules. A copy of the invite to the breakfast shows that Trent Lott, the former Senator who now works as a corporate lobbyist, is part of the host committee for the event. Patton Boggs attorney Ben Ginsberg, an attorney for Mitt Romney, is also listed as an event host.

Lott happens to represent a major client on issues relating the EPA’s MACT rules. According to disclosures reviewed by the Republic Report, Lott’s firm has been paid at least $240,000 by the American Association of Railroads, a group that opposes the new rules, to lobby Congress on the proposed regulation.

The hearing starts at 10:30am today, only two hours after the beginning of the fundraiser, which is hosted by Lott’s partner lobbying firm, Patton Boggs. Luckily, the Energy and Commerce Committee hearing is a short taxi ride away from Patton Boggs’ office near Georgetown.

Click more to view a copy of the fundraising invitation: 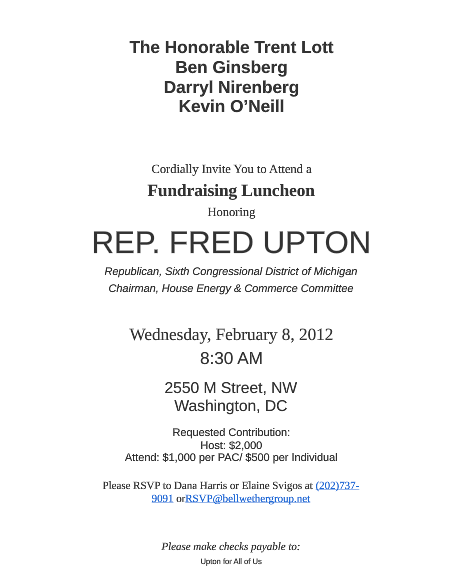