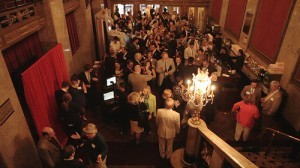 Last week, the oil and gas lobby group the American Petroleum Institute (API) held a red carpet film screening at the Warner Theatre in Washington. Such fancy film events are held regularly in DC, but few come with as sexy a title as this one: the “hydraulic fracturing event of the summer.”

Attendees, presumably there for the refreshments and connections more than to witness cinematic history, weren’t forced to sit through an entire film, just a panel discussion and “film trailers from pro-energy documentaries on hydraulic fracturing including ‘Truthland,’ ‘Empire State Divide’ and ‘Frack Nation.'” These were presumably created by the fracking industry in response to the riveting documentary “Gasland,” which exposed how the practice of hydraulic fracturing to extract natural gas has contaminated air and water in communities around the country. According to API’s website, the creator of “Empire State Divide” was not Martin Scorsese, Spike Lee, or Lena Dunham, but auteur Karen Moreau, “who since making her film was named executive director of the New York State Petroleum Council,” an API affiliate.

According to Politico, in attendance were “several hundred of Washington’s biggest influencers from Capitol Hill, K Street, federal agencies and the media.” These included, of course, API President and CEO Jack Gerard, who is paid upwards of $6.4 million a year to run this tax-exempt, non-profit group, as well as Jim Brandell, chief of staff to House Ways and Means Chairman Dave Camp; lobbyist and former top GOP Hill staffer Ron Bonjean of The Bonjean Company; and Tita Freeman, senior VP at the Business Roundtable.

The blog FamousDC seemed to have a good time: “The evening was a fun, social event filled with helpful experts, delicious snacks and clever cocktails. Fracktini, anyone?” We hope that if there is a Fracktini, it isn’t flammable.

All this merriment comes as New York Governor Andrew Cuomo faces a big decision as to whether to let fracking go forward in his state. He seems to be leaning toward allowing fracking in five southwestern counties.  A group of New York state Senators held a public forum to raise concerns last week.  A strong grassroots citizens coalition is growing in those five counties and across the state, concerned that residents of economically-depressed areas will end up even worse off after fracking.

Will the influence of big money play a role in the final decision?  The New York Public Interest Research Group reports that ten corporations or trade associations spent $4.5 million over the last three years lobbying in New York state on fracking and other natural gas issues. Chesapeake Appalachia, a subsidiary of troubled Chesapeake Energy, spent more than $1.2 million in lobbying expenses in 2010 alone. And a report issued earlier this year by Common Cause / New York found:

From January 2007 to October 2011, the Natural Gas industry made 2,349 campaign contributions to
state and local level New York politicians and parties. These contributions represent over $1.34 million
in industry spending.

Governor Cuomo has pledged to make his decision based on “science, and not emotion.”  That sounds good, so long as the process isn’t contaminated by expensive industry lobbying, film festivals, and Fracktinis.