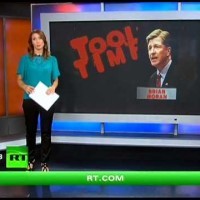 In May, Republic Report approached Virginia Democratic Party chairman Brian Moran and asked him if there was a conflict of interest between his role in the party — advancing the goals of President Barack Obama — and his job as a for-profit college lobbyist for the Association of Private Sector Colleges and Universities (APSCU), which has specialized in battling Obama’s attempts to hold the industry accountable to students and taxpayers.

He blew us off, saying that our reporting was “totally unfair” and that there was “absolutely not” any conflict between being chair of the Democratic Party and being a corporate lobbyist opposed to the Democratic president’s agenda.

In June, we again asked Moran why he continues to work for APSCU, even after the revelation that it is part of the American Legislative Exchange Council (ALEC), which works for a corporate agenda in state legislatures nationwide.  Last month the party Moran heads called on state legislators to end their affiliation with ALEC. But Moran continued to defend his role with ALEC member APSCU.

It now appears that Moran may have been feeling more heat than he let on. APSCU announced that Moran will resign from the trade group on August 1st.

Moran’s departure may be another sign that APSCU — and the industry it represents — is not invincible. The for-profit colleges may have a lot of money, a lot of connections, and a lot of lobbyists, but their representatives are still vulnerable to some good old fashioned public outrage. On the other hand, the move could merely be APSCU trading up from Moran to a more capable higher education hand, Bush Education Department official Sally Stroup.