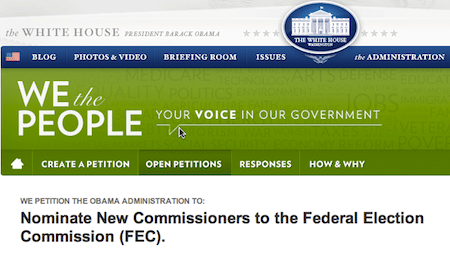 A White House petition sponsored by an array of good government groups has gained 25,000 signatures, enough to be reviewed by the Obama administration with an official response.

The text of the petition reads:

We expect candidates for federal office to follow our campaign finance laws, but the FEC – the agency charged with enforcing those laws – is completely dysfunctional. Three of the six commissioners staunchly refuse to enforce the law and five of the six are serving despite expired terms. Prior to your election, you professed support for campaign finance reform. We agree with you that the Citizens United Supreme Court decision was disastrous and the failure of Congress to require disclosure of campaign-related spending was outrageous. Nevertheless, you have failed to appoint new commissioners who actually would enforce such laws. To restore some faith into the democratic process, we urge you to nominate new commissioners to the FEC prior to the 2012 elections.

Yesterday, Republic Report named President Obama as our “Sell Out Of The Week” for embracing SuperPACs and failing to take action on campaign finance reform. We offered four suggestions for quickly improving the system, one of which was replacing the FEC commissioners.